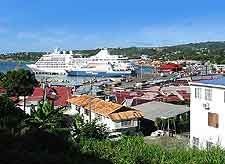 Although Tobago is considerably smaller than Trinidad, for many, that really is part of its charm, together with its wealth of truly awesome beaches and wondrous coastal attractions. Tobago tends to be far more relaxed and less developed than Trinidad and is located some 30 km / 19 miles to the north-east of its nearby sister isle, with these two popular Caribbean islands being linked by frequent ferries and flights.

Scarborough is the capital of Tobago and this is also the biggest town of the entire island, lying on the south-westerly shore and rather dominated by its historical Fort King George, which dates back to the 51770s. The sandy beaches around Pigeon Point and also Englishman's Bay are especially famous on Tobago, as it the scuba diving at Buccoo Reef and along the coast of Speyside.

Crown Point serves as the main hub for tourism and is conveniently next to the island's international airport, where up-to-the-minute tourist information is available. Tobago was made famous when it appeared in the Robinson Crusoe novel, which was written by Daniel Defoe and published almost 300 years ago. 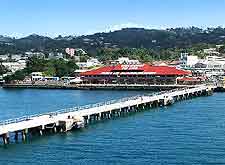 Apart from the stunning beaches of Tobago, sailing is another very notable attraction and allows tourists to enjoy a different view of the island's Caribbean coastline, as well as some secluded bays and natural phenomena, such as the Nylon Pool, next to the Buccoo Reef. Both Scarborough and Plymouth also contain some interesting tourist attractions, the latter of which is where to you find the Arnos Vale Waterwheel and an interesting sugar cane heritage. More information about Tobago Tourist Attractions. 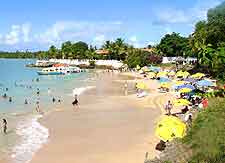 Plymouth is home to many more of Tobago's most important man-made landmarks, such as the Courland Monument and the 19th-century Fort James. Directly south of Plymouth and within Crown Point, the remains of Fort Milford are a little older. Also near to Plymouth and standing next to Grafton Beach is Fort Bennet, which was actually built in the latter part of the 18th century to protect the ships arriving in this part of Tobago to collect the valuable historical cargo of sugar cane. More information about Tobago Landmarks and Monuments. 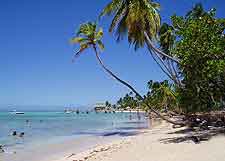 There really is only one museum of note on the island of Tobago, and this is to be found within Scarborough's Fort King George. Aptly known as simply the Tobago Museum, this cultural attraction offers information about the island's military past, slavery and colonial history, and houses everything from coins and maps, to pottery and other artefacts. For art galleries, your best bet would be to pay a visit to either the Lowlands, Mount Irvine or Store Bay. More information about Tobago Museums. 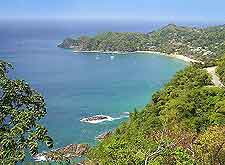 With Trinidad being just a relatively short ferry ride away, excursions from Tobago are to be encouraged and day trips are also exceedingly popular with tourists. Also perfect for island hopping is the Bird of Paradise Island, which also goes by the name of Little Tobago and is just a matter of minutes from Speyside. Further afield are a number of very noteworthy Caribbean attractions, which come in the form of Barbados, Grenada, Saint Lucia and also Saint Vincent and the Grenadines. More information about Tobago Attractions Nearby.