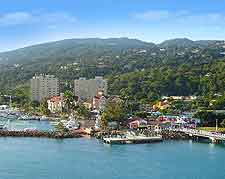 From the day the famous explorer Christopher Columbus set foot on Jamaica, the tide quickly turned against the native people. Though no European power ever saw Ocho Rios as important, today it is one of the island of Jamaica's most popular beach resorts.

Jamaica was originally the home of the Taino people, a subgroup of the Arawak Indians who once inhabited so much of the Caribbean and areas of Latin America. The Taino are believed to have arrived in Jamaica roughly 3,000 years ago, calling the island Xamayca, which literally translates as 'Lands of Water and Wood'. In the town of Falmouth, within the neighbouring parish of Trelawny, the Outameni Experience interactive tour showcases the rich history around Ocho Rios and the rest of Jamaica. 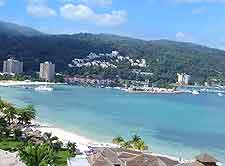 The Arrival of Christopher Columbus

During Christopher Columbus's famous voyage to the New World, he stopped at Jamaica in the year of 1494. By all accounts, the first place where he set foot on the island was Ocho Rios, which is commemorated today at Columbus Park with its Spanish colonial buildings and maritime relics on display. At the time, Columbus named the bay Chorreros, which means 'Rapid Rivers' in the Spanish language.

Slavery on the Island

The Tainos were all but erased from the island by war and disease, as well as slavery, all of which was brought to Jamaica by the Spanish. Slaves from Africa were first introduced to the island in 1517, being brought here to work on sugar cane plantations throughout Jamaica, a dark chapter in the history of Ocho Rios. 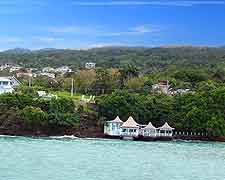 In the first half of 1655, the power struggle for the resources in the Caribbean turned in favour of the British, who seized Jamaica from its Spanish control. The English mistranslated the name Chorreros into Ocho Rios, but the name stuck.

A series of fierce battles took place in the latter part of the 1650s, between the Spanish and British, with history favouring the British. Neither the Spanish nor the English, however, ever saw much importance in the town, although roving pirates made good use of the bay as a strategic base for their activities. 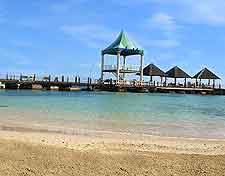 An End to Slavery

When slavery was officially abolished on Jamaica in the year of 1834, the town entered a period of poverty and rebirth. With colonial interests removed, the history of Ocho Rios was crafted by the newly freed slaves, who embraced their new-found freedom and slowly turned the town into a stable and peaceful fishing village.

By the late 20th century, the beautiful beaches of Jamaica had been discovered by holiday makers from North America. Ocho Rios was no exception, quickly growing into one of the island's top beach destinations, thanks in no small part to its appealing soft sand and crystal clear water. 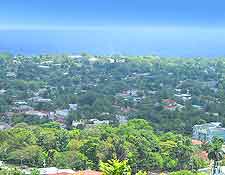 One of Jamaica's top natural attractions is sited right on the edge of Ocho Rios. Dunn's River Falls is a magical cascade of waterfalls, swimming pools and sea views from the top of the cliffs roughly 185 metres / 600 feet above. This is the top tourist spot around the town for the cruise ships and visitors who stop at this once-sleepy fishing village, which is now nothing short of a world-class resort.

With a deep water quayside built in Ocho Rios, this is a popular stop for cruise ships doing the rounds of the Caribbean. When berthed, the ships quickly offload thousands of tourists, who swamp this enticing resort for no more than a few hours, and then leave for the next part of their holiday.