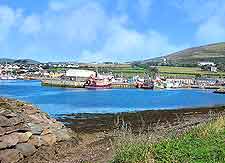 Dingle, or An Daingean in the Celtic tongue, is the principal tourist destination on the Dingle Peninsula in County Kerry, south-west Ireland. This interesting town sits on the Atlantic coast across low hills and is especially popular with holiday makers during the summer months. Tourism in the winter is non-existent.

Dingle has several interesting streets that are lined with colourful houses and is awash with pubs, cafés and shops. This is a very arty town and there are also lots of galleries and handicrafts stores. The Dingle Tourist Office on Main Street offers useful tourist information and is open from spring to autumn, being a good place to visit when you first arrive in town. 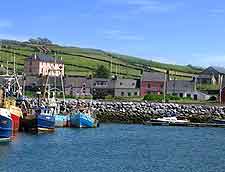 Whilst the town of Dingle may not be packed with places of interest, it does contain some quality attractions. The town is very much based around its harbourfront and here you can indulge in cruises, sailing, windsurfing, fishing and similar outdoor activities. When visiting the harbour, keep your eyes peeled for the town's famous friendly dolphin named Fungi, who chose Dingle as his permanent home many years ago. Families on holiday may like to explore the Oceanworld Aquarium and learn about some of the native fish of Ireland. Sightseers often head to St. Mary's Church, since this attraction stands out in terms of local architecture and dates back to the mid-19th century. More information about Dingle Tourist Attractions. 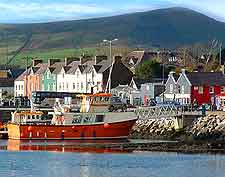 John Street sees much of the action in Dingle and runs alongside the harbour, connecting Main Street and various attractions. On Green Street is the Diseart Institute of Education and Celtic Culture, which embraces and celebrates the traditions of West Kerry. Located on the outskirts of the town is the historical Eask Tower, which was constructed in 1847 to assist ships arriving in the harbour, by using a large wooden arrow for directional purposes. If you are in the mood to visit some neighbouring islands, then consider spending time exploring the Blaskets. Boat trips regularly depart from the harbour and head to the uninhabited Great Blasket Island, and visitors should expect breathtaking cliff scenery and abandoned houses. The mainland town of Dunquin stands just across from the Blasket Islands and is home to a museum detailing the lives of the island's former residents, which included three renowned Irish writers. More information about Dingle Landmarks and Monuments. 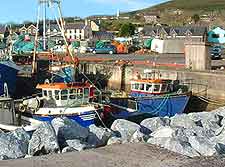 Although there aren't any museums in Dingle town as such, there are some good choices nearby. Situated to the north-west and within Ballyferriter, the Corca Dhuibhne Regional Museum offers a wealth of information relating to the culture of the Dingle Peninsula. Head northwards and to the village of Gallarus to find the ancient Gallarus Oratory church, which comes complete with its own visitors centre and gift shop, and considering its estimated age of more than 1,000 years, remains in a truly remarkable state of repair. In the town itself, several galleries offer something different to visit, with the best including the Greenlane Gallery on the Holy Ground and the Mazzland Art Gallery on Chapel Lane. More information about Dingle Museums. 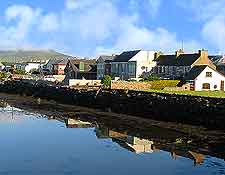 Those wishing to make the most of their holiday on the Dingle Peninsula should plan their time carefully and decide upon some day trips. Consider taking an excursion to the archaeological site of Dunbeg Fort, to the RIASC Monastic Site near Ballyferriter, or to the vast Killarney National Park. Tourists in search of beaches may also like to venture to nearby Slea Head and Ventry. Alternatively, the more energetic may consider hiking to the top of Mount Brandon, where on fine days, the panoramas don't come much better. Mount Brandon is actually the peninsula's highest point, and if you're not quite up to reaching the top, then many other less arduous trails are in the vicinity. More information about Dingle Attractions Nearby. 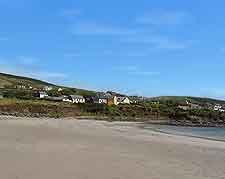