As the most important and sizeable city in the Republic of Ireland, it is no great surprise that Dublin comes with landmarks, monuments and memorials galore. Statues and sculptures include icons such as Molly Malone on Grafton Street and the giant water feature depicting Anna Livia, which was originally to be found on O'Connell Street, but was moved to the Croppy Acre Memorial Park to make way for the towering Spire of Dublin.

The city boasts no less than two cathedrals, named Christ Church and St. Patrick's, while standing within the grounds of Phoenix Park is the Irish White House or 'Aras an Uachtaráin', where the President of Ireland resides. This is a truly imposing landmark that should not be missed.

Dublin Castle can be found in the heart of the city and lies on Cork Hill, next to Temple Bar. Interestingly, the castle's original Norman structure was actually built in the 13th century, although now only the Record Tower remains from this construction. 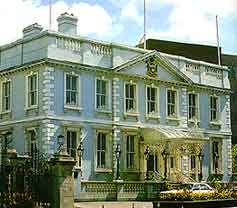 Address: Dawson Street, Dublin
Tel: +353 (01) 676 1845
Although this house is not actually open to members of the public, the impressive exterior is still worth visiting. This Queen Anne-style building was built by Joshua Dawson and has been the official residence of Dublin's Lord Mayors since 1715. The House of Representatives was assembled here in 1919 to adopt Ireland's Declaration of Independence and ratify the Proclamation of the Irish Republic.

Address: Croppy Acre Memorial Park, Dublin
This enchanting figure personifies the River Liffey and resides in O'Connell Street, opposite the general Post Office. James Joyce's mythical Anna Livia character is cast in bronze and reclines in a pool of fast flowing water. Locals affectionately refer to this statue as the 'Floozy in the Jacuzzi'. 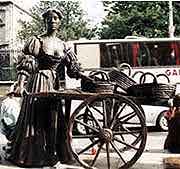 Address: Suffolk Street / Grafton Street, Dublin
Sweet Molly Malone is a much-loved fictional character in the city and features in Dublin's popular unofficial anthem 'Cockles and Mussels'. Always pointed out during guided bus tours, this life-size bronze resides on the corner of Suffolk Street and Grafton Street, where she is depicted in 17th-century attire, complete with flower cart and affectionately known by locals as 'The Tart with the Cart' and 'The Dolly with the Trolley'.

Address: O'Connell Street Upper, Dublin
A modern monument erected between 2002 and 2003, the Spire of Dublin stands just across from the James Joyce Statue and was built as a replacement for Nelson's Pillar, which was constructed during the colonial era and destroyed in the sixties by Irish republicans. This contemporary conical spire is made from stainless steel and towers for approximately 120 metres / 394 feet, being installed with the vision of creating an elegant 21st-century landmark.

Address: Christ Church Place, Lord Edward Street, Dublin
Tel: +353 (01) 677 8099
This church serves as the city's oldest building, founded in 1038 by King Sitric of Dublin and constructed by Viking settlers. In 1169 it was rebuilt in stone by the Earl of Pembroke and restored in true Gothic style in 1871. A large number of people visit the cathedral every year to appreciate the wonderful structure of the building and also to see the interesting features, which include remarkable monuments, sculptures, punishment stocks, a crypt which dates from 1172 and even the embalmed heart of the Archbishop of Dublin from 1180.
Open hours: daily, April to September - 10:00 to 17:00
October to March, Monday to Saturday - 11:00 to 16:00, Sunday - 10:00 to 16:30 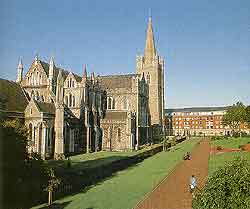 Address: Phoenix Park, Dublin
Tel: +353 (01) 670 9155
Originally much smaller, this 1751 country house has been extended several times and now appears very grand indeed. 'Aras an Uachtaráin' is Irish for 'House of the President' and this grand home has recently been opened to visitors. Guided tours are available every Saturday and start at the Phoenix Park Visitors Centre. The tour lasts an hour, beginning with a short historical film, and a bus transports visitors to and from the house. As tickets are limited, it is advisable to arrive early. The following items are not allowed into the house for security reasons - backpacks, buggies, cameras and mobile phones.
Open hours: Saturday - 09:40 to 16:20
Admission: free 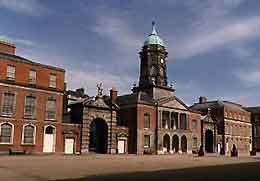 Address: Dame Street, Dublin
Tel: +353 (01) 677 7129
Over the years, Dublin Castle has been under siege, almost destroyed by fire and used as a prison, with its 'Undercroft' actually being part of a former Viking fortress. Now the State Apartments are occasionally used for government conferences and similar functions. Other features include the Portrait Gallery, the Gothic Royal Chapel, the Wedgewood Room and the Chester Beatty Library, which has a collection of over 22,000 manuscripts from all over the world. There is also a craft shop, a heritage centre and a restaurant.
Open hours: Monday to Friday - 10:00 to 17:00, Saturday, Sunday and Bank Holidays - 14:00 to 17:00
Admission: charge

Address: Military Road, Dublin
Tel: +353 (01) 671 8666
The Royal Hospital Kilmainham is widely thought to be the most important 17th-century building in Ireland. It is actually a replica of the Paris hospital 'Les Invalides' and construction finished in 1684. Originally built as a hospice for disabled and veteran soldiers, it operated as a hospital up to the 1920s, but after this the building fell into a state of disrepair and a recent major restoration project has returned the landmark to its former self. Inside there are four galleries arranged around a courtyard, a grand dining room, a spectacular baroque chapel with wonderfully detailed wood carvings and a café. The hospital is also home to the Irish Museum of Modern Art, which exhibits works by famous artists, such as Picasso and Miró, as well as many Irish artists. From the city centre, the Royal Hospital is just a short ride by bus or taxi. Hourly guided tours are available.
Open:
Royal Hospital, Tuesday to Saturday - 10:00 to 17:30, Sunday - 12:00 to 17:30
Museum of Modern Art, Tuesday to Saturday - 10:00 to 17:30, Sunday - 12:00 to 17:30, tours Wednesday and Friday at 14:30, Saturday at 11:30
Cost: free, individual shows may have separate charges
Museum of Modern Art permanent collection: free, small charge for special exhibitions