Getting Around, Dublin Travel, Transport and Car Rental 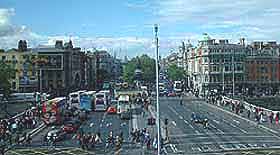 Dublin is a comparitively easy city to get around. The centre of Dublin is quite a compact area and many of the sights are within easy walking distance of each other.

Visitors to Dublin will find, particularly south of the River Liffey, is pedestrianised. If you are in the centre of the c ity there is an efficient bus network and the local DART railway runs an efficient service to three city centre stations. Alternatively, if you choose to be driven around there is a wide range of taxis, although these can prove an expensive way to explore Dublin.

Ireland's capital city is served by Ireland's premier airport, the busy and efficient Dublin Airport (DUB). It is located 6 miles / 10 km north of central Dublin and handles a substantial amount of international and domestic flights.

Traffic in Ireland has increased exponentially in the last few years and although the city can become somewhat congested at peak times, a car offers an extremely convenient way to explore outside of the city centre. If you do not take your own car, there are plenty of car rental firms to choose from. Car rental can be expensive in the peak season and the most competitive rates may be achieved by booking in advance. Broker companies use the major rental companies and will shop around to find the best deal. Car rental normally includes limitless mileage, together with passenger indemnity insurance and cover for third party, fire and theft - but not usually actual vehicle damage.

To rent a car you must show a clean and full driver's licence, which has been held for at least two years without endorsements. Cars are usually rented to individuals between the ages of 23 to 70, although there are companies that make exceptions.


Rules of the Road

Dublin has a large and reliable network of buses, which are usually green coloured double-decker buses. The majority of the buses start in the centre of Dublin city. Buses travelling to the north of Dublin start in the Lower Abbey Street / Parnell Street region. Buses to the west start in Middle Abbey Street and around the Aston Quay region. Bus routes to the southern suburbs commence at Eden Quay and the district around College Street area. Fares are normally very affordable and this provides a inexpensive and useful way to travel. Although the bus driver will accept inaccurate fares, you will have to collect your change at the central office in Dublin, as indicated on your ticket. This ensures that transactions are quick and keeps the buses running on time.

There are also numerous hop on / hop off tours and shuttle buses, which travel throughout the city and this is a delightful way to sightsee and travel around Dublin.

In Dublin, cruising taxis are around, but the best places to find cabs are at taxi stands at either train stations, bus stations or outside some hotels. Prices are based on metered mileage and there is a minimum charge. There are a whole range of taxi companies that operate throughout the city. Hackney cabs, which also operate in the city, do not have roof signs and most are not metered, so it is important to establish the fare beforehand. 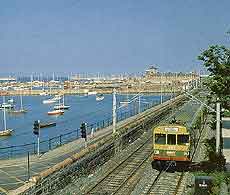 The DART service runs from 06:30 to 23:30 and it can get very crowded at peak times during the week, even though trains arrive every five minutes at these times. In the morning the rush hour is generally between 07:00 to 09:00 and in the evenings it is busy between 17:00 to 19:00 - so it is advisable to avoid travelling during these times.

Other suburban train services travel from the Heuston Station into Kildare Town, to the west of Dublin, via Celbridge, Sallins and also Newbridge. You can also catch trains to more distant locations such as Malahide, Skerries and to the north of Dublin. Dublin has three main train stations:

There are many regular car and passenger services directly into Dublin port from Holyhead in Wales, which is a 3.5-hour service and to Dun Laoghaire which takes 1.5 hours. Prices and departure times vary according to season and from each port you can either take the DART train, a bus or one of the many taxis waiting to take you into the city centre.