There are an enormous amount of sports available to visitors in the city of Dublin and being only minutes away from open countryside, it has many activities to tempt all lovers of the outdoors. The coastline of Dublin Bay to Dun Laoghaire offers a range of sports, including sailing, fishing and windsurfing - and the beautiful Wicklow Mountains are within easy reach for scenic walks.

There are also plenty of opportunities to go horse riding, cycling and play golf in the area. Dublin's sporting calendar is full of exciting events throughout the year.

This is very much a minority sport in Dublin, although a purpose-built facility has been recently built at Corkagh Park in Clondalkin, which is located to west of the city. Both 'Little League' and full-scale games are played here.

The basketball Super League is active and successful in Ireland, for both male and female players. Employing a mix of Irish, Europeans and Americans, the Dublin Bay Vikings, Tolka Rovers and UCD Marian are all popular with Dublin's youth. The National Basketball Stadium is located at Tymon Park, Tallaght.

A community initiative has now broadened the number of courts available to the public and most parks contain a basketball court. These courts are open to the public and are free to use - you will just need to bring a ball with you.

There are a number of tenpin bowling alleys in Dublin. Most of these alleys are part of leisure complexes and many are open 24 hours a day. Admission depends on the day and time, although it's often cheaper to bowl before 18:00 on weekdays. The alley at Stillorgan is the venue for all major competitions, including the 'Irish Open'.

For outdoor bowls, greens can be found on the south side of the River Liffey - Moray Park in Dun Laoghaire and Harbert Park in Ballsbridge. These are reserved for public use.

There are an increasing number of amateur cricket teams in Dublin and the surrounding area, although at present, cricket is still a minority sport.

Cycling is very popular in central Dublin and also in the countryside. On a professional level, there has been great interest from the city's success in the Tour de France, a race that held its early stages in Dublin in 1998. Many cycling enthusiasts attend the annual FDB Milk Race, which is held in the last two weeks of May and draws large crowds. There are currently no indoor tracks, but Eamonn Ceannt Park does have an outdoor cycle track.

Dublin's traffic gridlock has encouraged people to cycle into the city, although when doing this it is important to take extra care and observe both general traffic and pedestrians. Dublin bike tours offer guided cycling tours of the city centre, taking advantage of the interesting, quiet back streets. They also offer a Dawn Tour, which is undoubtedly one of the best times to admire the city's wonderful architecture. Alternatively, there are plenty of quiet roads to enjoy in the nearby countryside. If you bring your own bike you can easily transport it cheaply on the buses and trains - or alternatively they can be rented from stores in Dublin. 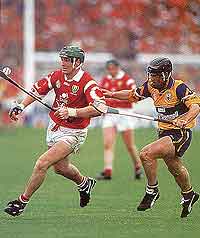 The Gaelic Football Association was founded in 1884 and the early motivations were both sporting and cultural. They formalised the codes of the ancient games of Gaelic football, hurling and handball in an attempt to revive and modernise them. This proved very successful and today it has become Ireland's largest amateur sports organisation, with more than 2,000 clubs nationwide. In Gaelic football, players propel a soccer-size ball with their feet and hands, whereas in hurling a much smaller ball is hit and dribbled with a stick. Both games have teams of up to 15 players and the games last for two 35 minutes periods. There are many minor matches and these are played from August to May in public parks, usually on Saturday afternoons. Larger matches are held in the many major grounds and senior clubs.

Some of the best golf courses in the world can be found in Ireland and Dublin is no exception to this. There are championship courses and many more top-level courses all within a 30-minute drive from Dublin city centre. Green fees vary, depending on the ranking of the course. The courses at Royal Dublin and Portmarnock are the most well-known - visitors may need to be accompanied by existing members during peak times.

A night out at the dogs is still a popular pastime in the city and was once considered a lower-class substitute for horse racing. Greyhound racing has definitely been re-branded in Dublin for the new millennium and adverts for the sport have attracted a growing following. It is an inexpensive evening out and the atmosphere can be electric. With improved facilities, the sport is growing in popularity and there are greyhound tracks in Harold's Cross Road and Shelbourne Park.

Thanks to Ireland's qualifications for recent world cup games, the country is completely soccer mad. The interest in the game is combined between the national team, which plays at Lansdowne Road and the Football Association of Ireland's Premier Division. Most big matches are played on either Friday nights or Sunday afternoons. In addition to these, many amateur matches are played all over Dublin in Sunday leagues and Pheonix Park is often a good place to watch the locals play soccer. 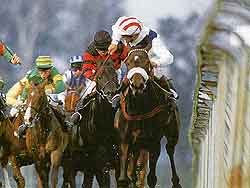 It is hardly surprising that horse racing is so popular in Dublin, with Ireland being famous throughout the world for its jockeys and bloodstock. The main tracks are Nass at Pipper Road in Kildare and Leopardstown at Foxrock in Dublin. They both offer flat and National Hunt Racing with the Nass track being open from October to July and the Leopardstown track open all year.

The restructuring of Irish rugby union has created a competitive All-Ireland league to support an inter-provincial tournament. This success has led to Ulster's recent victory in the European Cup. The final was held at Lansdowne Road, which is home of the national team, and Ulster's victory promises to further interest in the game. Matches in the All-Ireland League are regularly played in Dublin on a near-weekly basis from August to May and the inter-provincial games are held in the autumn. The season culminates in the Six Nations international tournament.

Water sports are among Ireland's favourite recreational activities, which is hardly surprising as the coastline is over 3,000 miles / 4,800 km long. Some are the most popular sports include surfing, scuba-diving, windsurfing, water skiing and canoeing. There are many facilities for all of these water sports along the Dublin coast and in Dublin Bay.

Other Dublin sporting activities include: