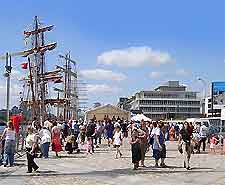 Leading magazines for upcoming events and happenings are regularly published and there is a free weekly event guide that is readily available.

They contain up-to-date listings of events throughout Ireland, with a focus on Dublin and are aimed specifically at tourists and visitors.

These magazines are a useful source for shopping, dining and entertainment - providing you with a huge choice of things to see and do in Dublin.

If you plan to visit at Easter, remember that theatres and cinemas are closed for the last three days of the preceding week.


Dublin is a great town for live music. On a given night, you can find almost anything, rock, pop, jazz, blues, traditional Irish, country, or folk. Music and dance concerts take place in a many of Dublin's venues, including theatres, churches, clubs, museums, sports stadiums, castles, parks, and universities, where international performers often play.