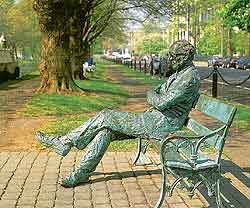 
Good manners are welcome everywhere and expected by most people. The Irish are quite tolerant of most things, but visitors are expected to abide by certain codes of behaviour and general etiquette. These include standing in line, waiting your turn, avoiding barging, shoving and general confrontation. In public places, such as trains and buses, the Irish tend to speak quietly and generally consider shouting and speaking loudly in these situations to be offensive.

The Irish expect their privacy to be respected and simple things like apologising if you bump into someone is greatly appreciated and the gesture is usually returned. They are incredibly polite people and during your stay you will undoubtedly here them say 'Thanks a million!' many, many times.

Pubs in Dublin are full of charm and character. They are warm and friendly and often serve fine food. Long after your visit to Dublin, it is quite likely it will be the lasting impressions of the pubs that you remember the best.

The traditional image of basic Irish cuisine is usually little more than potatoes, bacon and boiled cabbage, but nothing could be further from the truth. These days, the standards of cooking in Dublin are usually remarkably high, but unfortunately the prices are often high also. However, there are some very reasonably priced restaurants that are worth looking out for. 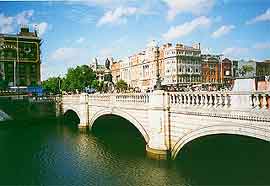 The Republic of Ireland is offically bilingual and almost all of the road signs have names in both English and Irish. English is spoken almost everywhere, but now and again you may find road signs only in Irish, so a map is vital on long excursions.

Tipping is quite discretionary, with taxi drivers usually being given a 10% gratuity or thereabouts - although this is not essential. Restaurants often include service charges and these are always clearly stated on the menus, otherwise a gratuity of around 10 to 15% is usually expected in recognition of prompt and courteous service. Hotel staff, such as luggage handlers, happily accept a small tip. Generally, no other public service workers expect tips. You should always pay tips in cash, as this way you can be sure that the person it is intended for receives it fully.

The first-time visitor to Dublin cannot help being struck by the number of churches. A good many belong to the Church of Ireland (Protestant Episcopalian), traditionally the religion of the old Ascendancy. Several are attached to other Protestant denominations, such as Presbyterian and Methodist. The overwhelming majority are Roman Catholic, reflecting that religion's domination of the city's Christian belief.

In many buildings and public transport, rules restrict smoking and this is usually indicated by no-smoking symbols in prominent places. Most pubs and bars welcome customers who wish to relax with a drink and smoke, although many tend to cater for smokers in different areas.

Smoking in Ireland is not as fashionable as it once was, so it is always worth exercising discretion and sensitivity when selecting a place in which to smoke. The best advice would be not to smoke unless others around you do so.

The Euro is made up of eight coins and seven paper notes and was introduced on January 1, 2002. The 12 members of the European Union - Austria, Belgium, Finland, France, Germany, Greece, Ireland, Italy, Luxembourg, Netherlands, Portugal, and Spain - planned the event for more than a decade, determining a conversion rate for each country's national currency. The colourful euro bills, which include holograms and shades of green, yellow, blue, mauve, and orange, are identical across the Euro area. Coins have one common and one national side, but they can be used in any of the 12 countries, regardless of the country of issue. Old currencies are no longer accepted, although they can still be converted to Euros in central banks.

Address: Suffolk Street, off Grafton Street, Dublin
Tel: +353 (01) 605 7700
Dublin Tourism is an organisation that is sponsored by the state and is made up of tourism related businesses in the region. The main Dublin Tourism and Tourist Information Centre can be found on Suffolk Street, but there are others throughout Dublin city.
Open hours: daily, July to August - Monday to Saturday 09:00 to 19:00, Sunday 10:30 to 15:00; September to June - Monday to Saturday 09:00 to 17:30

Centrally located drugstores are known locally as pharmacies or chemist shops. Many are in the city centre and a few remain open until late.

When leaving Ireland, US and Canadian visitors and entitled to a refund of value-added-tax (VAT) which is currently 20% of the purchase price of most goods and 12.5% of those outside the luxury category. Most outlets and department stores in Dublin operate a scheme called 'Cashback' which enables US and Canadian visitors to collect currency rebates at Dublin airports when leaving the country. Alternatively, refunds can be claimed from individual stores after leaving the country. VAT paid on accommodation, car rentals, meals and similar services is not refundable.