The birthplace of innumerable great writers and poets, Dublin has so many enticing attractions to see that tourists will find these sights hard to choose between. Simply walking around the city is a great way to sightsee, with the vibrant Temple Bar area being especially appealing and the perfect place to shop or have a spot of lunch.

Ha'Penny Bridge is another notable tourist attraction in central Dublin and is typically Victorian in character. If you are holidaying here as a family, then a day spent exploring the animal attractions of Dublin Zoo will be money well spent. Tourists may also like to consider a trip to the Chimney at Smithfield, Trinity College, the Viking Adventure, Newman House, Merrion Square, the Olympia Theatre or to the James Joyce Centre. 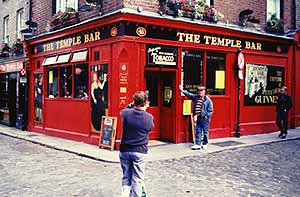 Address: Temple Bar, Dublin
Regarded as Dublin's cultural centre, Temble Bar has been recently transformed into an atmospheric and lively neighbourhood, full of history. No more are the buildings derelict and the streets badly lit. With new squares, re-built streets and unique buildings restored to their former glory, Temple Bar is now full of cafés, restaurants, pubs and most of all, a friendly atmosphere. There is a Book Fair and Food Market on Saturday and every evening the large concentration of pubs and bars turn this district into a party zone, almost every night of the year. There are several new cultural centres very nearby and in the summer there are often extra events, including children's entertainment and even the screening of films outdoors. In Parliament Square, Read's Cutlers at No. 4 claims to be Dublin's oldest shop - over 240 years old. Temple Bar is located between the River Liffey and Dame Street, west of College Green and the Bank of Ireland.

Open-top hop on / off guide bus tours operate throughout the day at regular intervals in central Dublin. They provide an easy way of sightseeing and with daily hop on / off tickets, they are also a very useful way to travel since you can leave the bus to explore and get back on when you are ready. The tours generally last around 75 minutes and connect all of the major points of interest.

There is also a Dublin Ghost Bus tour, which departs in the evening, highlighting Dublin's history of felons, phantoms and even Dracula's Dublin past. The tour lasts about two hours and is available to adults and children over 14. 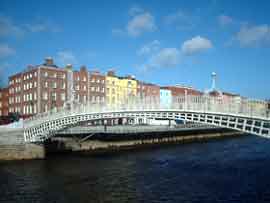 Address: Temple Bar, Dublin
This famous Victorian cast-iron bridge has a special place in the heart of Dubliners. Crossing the River Liffey, the busy bridge links the popular area of Temple Bar to the Mary and Henry Street shopping areas. The bridge was named after the half-penny toll that was charged to cross the bridge until the early 20th century. Many locals, including Yeats, resented paying this price to use this bridge and preferred to walk the long way round, via O'Connell Bridge. The nearby Millennium Footbridge has been opened to relieve the congestion on the Ha'Penny Bridge.

The Chimney at Smithfield

Address: Smithfield Village, Dublin
Tel: +353 (01) 817 3800
This tall chimney is over 67 metres / 220 feet high and has been recently been restored. There is now a glass observation tower which provides spectacular panoramic views across the city. The Chimney at Smithfield is located next to the Jameson Distillery and is a 20-minute walk from Temple Bar, or alternatively, it can be easily reached by bus.
Open hours: daily 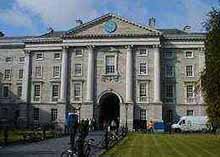 Address: Fellows Square, Trinity College, The University of Dublin, Dublin
Tel: +353 (01) 608 2308
This is without doubt Ireland's premier university and it was originally called the 'University of Dublin'. Covering over 40 acres of greens and cobbled squares, this institution was founded in 1592 by Elizabeth I and is situated south of the River Liffey, near Pearse Station. Trinity College is one of the most famous educational institutions in the world and was originally for Protestants only. This restriction was lifted in 1793, but the Catholic Church then forbade its youth to attend. Amazingly, this restriction was only completed lifted fairly recently, in the 1970s. With guided tours and one of the oldest books in the world in the Old Library - the elaborately illustrated famous 1,200 year old Book of Kells - Trinity College attracts over 500,000 visitors each year. There are also impressive grounds to explore, many interesting rooms to visit and a detailed 45-minute audio-visual all about Dublin, past and present.
Open hours: daily
October to May - Monday to Saturday 09:30 to 17:00, Sunday 12:30 to 16:30
June to September, Monday to Saturday 09:30 to 17:00, Sunday 09:30 to 16:30
Admission: charge

Address: Essex Street West, off Fishamble Street, Temple Bar, Dublin
Tel: +353 (01) 679 6040
With many interactive exhibits recreating Viking life in the narrow streets of Dublin, or 'Dyflin' as it was known back then, more than 1,000 years ago, there is a large collection of Viking artefacts. These relics were actually recovered from many excavations in the Temple Bar area. The Viking Adventure Centre is situated next to the Civic Offices in the west end of Temple Bar and includes a craft shop, food facilities and a car park.
Open hours: Tuesday to Saturday 10:00 to 16:30, closed Sunday and Monday
November to February - closed between 13:00 to 14:00
Admission: charge, reductions for families and groups over 20
Nearest DART train station: Pearse Street.

Address: 85-86 St. Stephen's Green, Dublin
Tel: +353 (01) 706 7422
Recently restored, these combined two houses are situated near to Grafton Street, on the south side of the Green. They are widely considered as probably Dublin's best examples of Georgian design and architecture. Particular points of interest include some very detailed plasterwork by the Lafranchini brothers and by Robert West. In 1850 Cadinal Newman actually founded a small Catholic University here and James Joyce was one of the students. Number Twenty Nine is nearby and next door is the University Church.
Open hours: daily
Admission: charge, including a guided tour, groups should book in advance
June to August: Tuesday to Friday 10:00 to 17:00, Saturday 14:00 to 17:00, Sunday 11:00 to 14:00
Nearest DART train station: Pearse Street.

Address: 29 Lr. Fitzwilliam Street, Dublin
Tel: +353 (01) 702 6165
This late 18th-century house has been beautifully restored and now displays detailed examples of period Irish craftwork. With a gift shop and a tea room, it is near the National Gallery and easy to reach by either foot or bus.
Opening hours: Tuesday to Saturday 10.00 to 17.00, Sunday 14.00 to 17.00, closed Monday / two weeks at Christmas time
Admission: charge, children free
Nearest DART train station: Pearse Street

Opened in 1830 with just one wild boar and an admission price of 2.5 pence, Dublin Zoo is the world's third oldest public zoo. Famous for its successful lion breeding programme, the big cat enclosure has recently been renovated and is now set around two large lakes. Features include the old, ornate South America House, home to creatures such as golden lion tamarins and squirrel monkeys and a Discovery Centre, where exhibits include the world's largest egg and a 'Meet the Keeper' opportunity, a chance to see the animals being fed and talk to their keepers. There is a zoo train that runs all day in the summer and at weekends in the winter, and several large paddocks with animals including giraffes, zebras, hippos, elephants and hairy, two-humped Bactrian camels. The zoo prides itself on its contribution to conservation and has breeding programmes for several highly endangered species, including the snow leopard.

Address: Smithfield Village, Dublin
Tel: +353 (01) 817 3820
Ceol literally means "music" in Irish and even if you are not are a big fan of traditional Irish music and dance legacy, there is plenty to see and enjoy in The Irish Traditional Music Centre. With many high-tech interactive displays, audio-visuals and videos, you will quickly appreacite the wonder of traditional Irish music and instruments. There is also a large 180° wide-screen auditorium, which shows the captivating film 'The Music of People'. The centre is easy to reach by bus.
Open hours: daily Monday to Saturday 10:00 to 18:00, Sunday 11:00 to 18:00 (last film 45 minutes before closing)
Admission: charge

Address: 35 North Great George's Street, Dublin
Tel: +353 (0)1878 8547
This restored Georgian townhouse was the home of James Joyce, the famous writer. It now celebrates his life and is filled with extensive memorabilia and exhibits, including photographs of some the real Dubliners that became characters in Joyce's books, particularly in his most famous novel 'Ulysses'.
Open hours: daily, Monday to Saturday 09:30 to 17:00, Sunday 12:30 to 17:00
Admission: charge

Address: Merrion Square, Dublin
Set in the heart of Georgian Dublin, this picturesque square has been the home of countless famous people, including Oscar Wilde. A museum in the square remembers his life and work.

Address: Bow Street, Smithfield, Dublin
Tel. +353 (0)1807 2355
With an opportunity to sample the drink itself, first a brief film explains the history of whiskey and Irish distilleries. There is a guided tour, which follows the process of whiskey making inside this restored distillery.
Open hours: daily 09:00 to 18:00
Admission: charge

Address: The Duke Pub, upstairs, 9 Duke Street, Dublin
Tel: +353 (01) 670 5602
This pub crawl in hosted by two professional actors for those who enjoy both poetry and drinking. The actors tell stories about Dublin's literary life and the itinerary includes a literary quiz and stops at such pubs as the Old Stand, one of Brendan Behan's haunts, and the Davy Byrne's pub, where Leopold Bloom drops in for a glass of wine and a cheese sandwich in James Joyce's novel 'Ulysses'.
Admission: charge
April to Octber: Monday to Saturday 19:30, Sunday 12:00 and 19:30
November to March: Thursday to Saturday 19:30, Sunday 12:00 and 19:30

Other Dublin attractions worth a visit