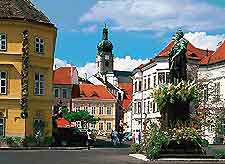 Although Gyor (pronounced 'jyeur') is one of Hungary's biggest industrial centres, there is plenty in this lively city in the way of tourism. After the Hungarian capital of Budapest, and also the city of Sopron, Gyor contains the highest quantity of historical buildings and significant monuments in the whole of Hungary.

Any travellers passing through the Transdanubia area of Hungary should not miss spending time in Gyor, which is centred around the confluence of the Rába and Monsoni-Danube rivers. Next to the train station, take a walk up the traffic-free street of Baross Gábor Utca and you will almost feel like you are stepping back in history, since there are so many sights from the 17th century and the 18th century situated here. Close by and on the northern side of the county hall, the Gyor tourist information kiosk of Tourinform is situated on the Arpad Utca. 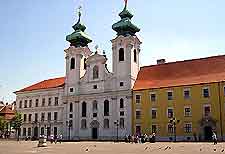 The Bésci Kapu Tér is the perfect place for tourists to begin sightseeing in Gyor and this spacious square is home to the rather splendid Carmellite Church and some rather interesting fortifications from the 16th century. Nearby, the Káptalan Domb (Chapter Hill) is dominated by the Gyor Cathedral, which originates from the 11th century and contains some priceless medieval gold artefacts. Just minutes away is the Széchenyi Tér, once a bustling marketplace in the Middle Ages and where you will find the Church of St. Ignatius Loyola. More information about Gyor Tourist Attractions and Landmarks.

Many different subject matters are covered at the various museums in Gyor, offering information about the Hungarian history and displaying many valuable antiquities, especially at the János Xánthus Museum. Art is another topic well represented within Gyor and in particular at the City Art Museum on the Apáca Utca, where ceramics by local artist Margit Kovács make up an important part of the overall exhibits. Also of interest is the enormous exhibition of dolls at the Zichy Palace, and the fine art comprising the Imre Patkó Collection. More information about Gyor Museums and Art Galleries. 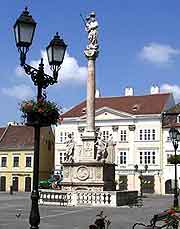 Much of Western Transdanubia warrants a closer look and Gyor is well placed to explore many close by Hungarian cities and towns. The countless tourist attractions within Budapest are just over 90 minutes away and therefore easily explored, particularly for those prepared to make an early start. Considerably closer to Gyor is the neighbouring town of Pannonhalma, where its Castle Hill (Várhegy) and historical abbey are the main highlights. Also, try to make time to stroll around Sopron and climb its Fire Watch Tower, or go shopping at the ancient Saturday Market in Szombathely, which dates back to the Middle Ages. More information about Gyor Attractions Nearby. 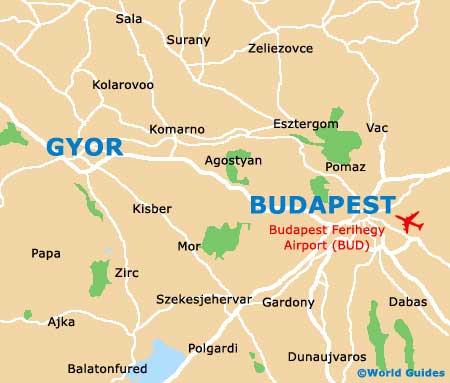