Getting Around, Le Mans Travel, Transport and Car Rental 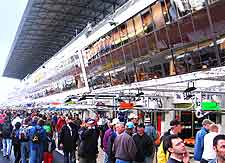 Le Mans has a number of transport options, including trains, buses and coaches. A new tramway is also being built and will ease travel around the city.

Getting around Le Mans city centre is particularly easy because of its relatively small size. Indeed, many of its attractions can be navigated on foot or bicycle.

Address: Aeroport du Mans-Arnage, Route d'Angers, Le Mans, F-72100, France, FR
Tel: +33 0243 84 34 85
Le Mans Airport is situated directly outside the city's famous Circuit de la Sarthe, just a few kilometres from the very centre of the city. Free parking is available at the airport. Bus travel links and taxis are available to transport visitors into the centre of Le Mans. There is also an airport at nearby Tours, which operates flights from London's Stansted Airport. 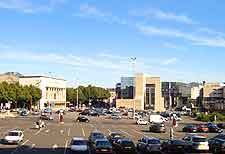 Le Mans is well placed to reach many of France's nearby large cities, including Rennes, Paris and Nantes. In addition, the city is the gateway to the Loire Valley and has excellent road access to its many attractions, including chateaux, medieval towns and vineyards.

The main city bus transport terminal is located underneath the Place de la République. Buses travel from here around the city and to the local train station. A reasonably priced Eurolines coach service also operates directly between Le Mans and Paris, enabling visitors to travel to the capital of France with relative ease and minimal expense.

Getting to Le Mans by train couldn't be easier, thanks to the TGV service which operates between Le Mans and Paris, Rennes, Nantes and Lyon. The main train station is located close to the city centre, just south of the Place de la République, being easy to find and close to many attractions and accommodation options.

Bicycles are a good way to travel around the city and can be rented from the Place St. Pierre in the Old Town area. Cycling is also a relaxing way to explore the neighbouring countryside, on the outskirts of Le Mans, where many winding lanes and pleasant areas of green await.