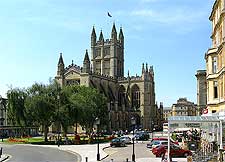 Legend has it that in the 9th century BC, Prince Bladud, a leprosy sufferer, was cured by the healing waters of hot springs in the Avon Valley. When he became king, he returned with his people to the place that had cured him. Thus, the city of Bath was founded.

The Romans arrived in Bath shortly after the invasion of Britain in 43AD. They named the city Aquae Sulis, after the goddess Sulis Minerva, and created a considerable urban settlement on the site. This included grand temples and bathing complexes.

From the late 4th century on, the Romans gradually withdrew from Britain and the city fell into decline. By the time of King Alfred's arrival in the city in 577, any evidence of Roman urban life had largely disappeared. It took the arrival of King Alfred to re-establish the city once again. In 973, Bath had regained enough influence as a city to host the coronation of King Edgar in Bath Abbey. 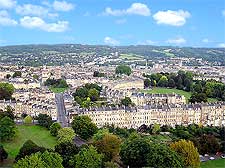 The arrival of the Normans in Bath was an important point in history, turning the city into a place of real religious significance. In 1088, John of Tours became the first bishop, building a large church and a bishop's palace there. A larger cathedral was built shortly before Henry VIII's religious reforms. During the Elizabethan era, fortunes were further revived, along with the spa baths and, in 1590, Bath was granted city status by Royal Charter.

During the 16th and 17th centuries, Bath continued to grow as a city. However, it wasn't until the 18th century, that expansion began in earnest. During the Georgian period, the city grew into a thriving spa resort that was popular with fashionable society. Consequently, there was an increasing demand for suitable accommodation.

The architects responsible for the city's famous Palladian-inspired terraced streets, circles and squares were John Wood the Elder and his son, John Wood the Younger. Bath also acquired its own theatre, Pump Room and Assembly Room at this time. Richard 'Beau' Nash and Ralph Allen were also important influences on the city's ambitions. From 1801 to 1806, the city was the home of the English authoress, Jane Austen. 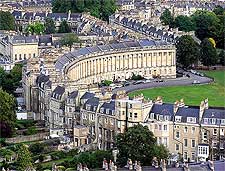 From the mid-19th century on, Bath faced more and more competition from other European spa towns. The city's golden age was finally over. By this time, however, it had become one of the largest cities in Britain, with its own railway station, designed by engineer Isambard Kingdom Brunel.

In 1987, Bath's cultural significance was formally recognized when the city was granted World Heritage Site status.