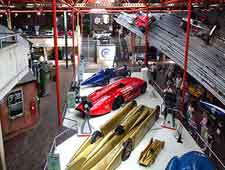 There are a number of museums within the New Forest area, suiting a variety of tastes. The New Forest Museum and Visitor Centre at Lyndhurst is a good place to visit when you first arrive and allows you to learn more about the park itself.

Part of the Beaulieu village attraction, the renowned National Motor Museum is home to an incredible collection of vehicles, which number more than 250 and span every single decade of motoring. Alternatively, New Forest visitors should check out the Maritime Museum at Bucklers Hard, which celebrates its incredible shipbuilding past. 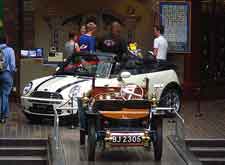 Address: Beaulieu, Brockenhurst, New Forest, Hampshire, SO42 7ZN, England, UK
Tel: +44 01590 612345
Some of the most precious exhibits at the Beaulieu National Motor Museum include vehicles such as the Bluebird, which broke the world land speed record in 1964 and cost around £1 million to build. Other valuable cars include a Rolls Royce Silver Ghost dating back more than 100 years, an authentic replica of the Chitty Chitty Bang Bang car, Del Boy's iconic Robin Reliant, and even a motorised orange vehicle. The motorcycle gallery is another clear highlight and boasts one of the biggest collections of Ducatis in existence. Visitors to the Beaulieu National Motor Museum will also enjoy taking a ride onboard a space-age pod, travelling through the history of motoring, which started when prehistory man invented the wheel. Also worth looking out for are the World of Top Gear exhibits, where creations made famous on the BBC2 TV show Top Gear can been seen up close.
Open hours: daily, late May to September - 10:00 to 18:00; October to late May - 10:00 to 17:00
Admission: charge, discounts for children, seniors and families

Address: High Street, Lyndhurst, New Forest, Hampshire, S043 7NY, England, UK
Tel: +44 023 8028 3444
The New Forest Museum and Visitor Centre really is a must-see attraction for anyone based in the Lyndhurst area and contains a wealth of information about this popular national park. Various seasonal events take place here, including wildlife lectures, workshops and art exhibitions, which are staged at the centre's New Forest Gallery. As you arrive, the video entitled 'Impressions of the New Forest National Park' shows you what you can expect to see and experience during your stay, while the displays on hand cover topics such as geology, local embroidery, forestry, wildlife and conservation. The onsite gift shop is well stocked and a good place to pick up local books, postcards, trinkets and souvenirs.
Open hours: daily - 10:00 to 17:00
Admission: free entrance to the shop, visitor information centre, gallery and reference library, charge for entrance to the museum, discounts for children, students and seniors, children under 16 years old are free when accompanied by an adult 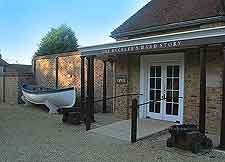 Address: Bucklers Hard, New Forest, Hampshire, England, UK
Tel: +44 01590 614645
Rather like stepping back in time, Bucklers Hard remains a charismatic 18th-century seaside village, with a strong maritime past. This history and tradition is celebrated at the village's proud Maritime Museum, which may be relatively small, but is packed with information about the area's shipbuilding during the period of the Napoleonic Wars, when the abundant oak trees of the New Forest were in great demand. Many impressive warships were built in this very spot literally centuries ago, with one of the most famous being the Royal Navy's very own HMS Agamemnon. Completed at Bucklers Hard in 1781, the Agamemnon was reputedly the favourite ship of Lord Nelson, and even fought at the famous Battle of Trafalgar in 1805.
Open hours: daily, April to September - 10:30 to 17:00; October to March - 11:00 to 16:00
Admission: charge, discounts for children and seniors 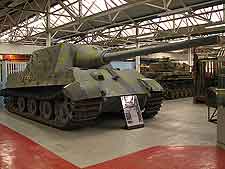 Address: Bovington, Dorset, BH20 6JG, England, UK
Tel: +44 01929 462359
Located in the Wareham area and around an hour's drive to the south-west of Lyndhurst, the Bovington Tank Museum resides on the northerly side of Wool, in the historic army base of Bovington Camp. In total there are approximately 300 different vehicles on display here, collected from more than 25 countries worldwide. Regarded as the world's most extensive assortment of armoured vehicles and tanks, the Bovington Tank Museum is well worth considering. The Bovington Camp was established as long ago as 1916 and has been open to members of the general public since 1947. During the summer months, many of the tanks can be observed in action.
Open hours: daily - 10:00 to 17:00
Admission: charge, discounts for children, seniors and family groups, children five years old and under are free