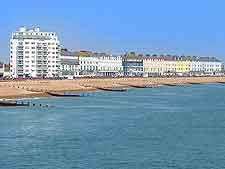 The town of Eastbourne is fast shedding its image as a haunt for pensioners and is now very much more family orientated, being a seaside resort working hard to suit all ages. Visited by some four million tourists each year and boasting stunning coastline views, alfresco dining at its Sovereign Harbour, surrounding South Downs countryside and a cultural quarter with theatres, galleries and both annual international tennis championships and airshows, Eastbourne is noticeably more refined and less tacky than many of southern England's seaside towns.

Reputed to be the sunniest spot in the United Kingdom, Eastbourne is at its most interesting within its Old Town area, which lies on the north-westerly outskirts of the town centre and is home to a group of antique shops and historic buildings. Summer is a popular time to visit, when tourism is in full swing. For the latest tourist information and events listings, the TIC on Cornfield Road is open throughout the year, and will happily share their expert knowledge and offer a convenient accommodation booking service.

Many visitors are quite oblivious to the town's strong connections with the film industry, and over the years Eastbourne's traditional and unspoilt appearance has been used as a backdrop for movies featuring James Bond, Harry Potter and Kevin Costner, amongst others. On the television screen, the town has also made appearances in Foyle's War, Little Britain, Miss Marple and Top Gear. 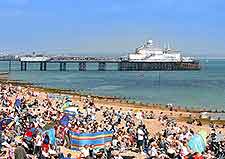 The Eastbourne beaches are without question the town's crowning glory, and many of the biggest attractions are closely related. Children's theme parks line the seafront, such as the Fort Fun Theme Park. Land trains known as 'Dotto trains' regularly ply the promenade and connect the main places of interest, travelling between Holywell and the Prince William Parade. Eastbourne's Congress Theatre, Devonshire Park Theatre and Royal Hippodrome may also be of interest to visitors and generally feature an extensive programme of performances. Alternatively, why not pay a visit to the Carpet Gardens next to the bandstand, and enjoy one of the most spectacular flower displays that you are ever likely to encounter. More information about Eastbourne Tourist Attractions. 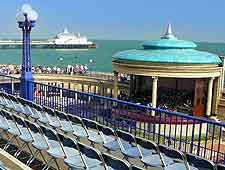 Serious seaside landmarks come thick and fast in Eastbourne, with its beautiful Victorian pier being the town's pride and joy. The historic Martello towers also add much character to the surrounding coastline, with the Wish Tower on King Edward's Parade, next to the Western Lawns, being the best known and featuring its very own cafe. Rather more natural, the cliffs of Beachy Head are quite renowned in East Sussex and come with their own pair of lighthouses. Also quite dramatic in its appearance are the chalk cliffs named the Seven Sisters, which really do dominate the coastline and really do bear a striking resemblance to the white cliffs of Dover. More information about Eastbourne Landmarks and Monuments. 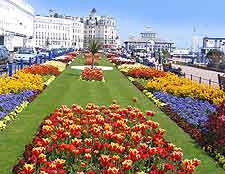 If you can bear to drag yourself away from the beachfront, then you will find that there are a handful of museums present within the town. The most visited is the Military Museum, which is part of the Redoubt Fortress and houses some important collections. Filled with information about yesteryear, the 'How We Lived Then' Museum of Shops is a charming attraction. Just outside of Eastbourne, Pevensey Castle and the Mint House deserve a look, while for those with more interest in the world of art, both the Towner Gallery and the Musgrave Collection stand out. The Towner is especially impressive and contains works by a number of world-famous artists, including Henry Moore and Picasso. More information about Eastbourne Museums and Eastbourne Art Galleries. 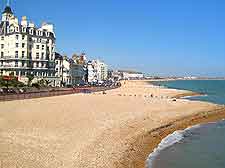 If you plan to get out and about during your time in Eastbourne, then the Sussex area is brimming with day trips and beckoning attractions. None come bigger or more popular than those in the city of Brighton and Hove, which is located next door and offers an extensive sandy beach, pier amusements and a truly awesome Royal Pavilion, which looks like it could be the palace of an Indian maharaja. Also close to Eastbourne are the attractions of Bognor Regis, Dover, Folkestone, Hailsham, Lewes, Newhaven, Shoreham-by-Sea and Tunbridge Wells. Tourists often enjoy an excursion to the towns of Battle and Hastings, where a wealth of memorabilia relating to the 1066 Battle of Hastings is ever present. More information about Eastbourne Attractions Nearby. 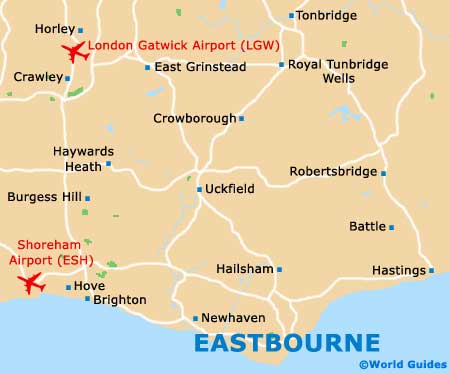