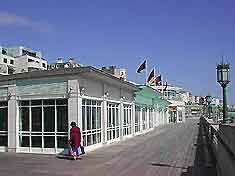 Brighton has more than 400 restaurants and cafés, meaning that diners are provided with plenty of choice. Long considered to be one of the best places for dining on the south coast, Brighton has expanded its variety of cuisine and now has an enormous selection of different restaurants and gastro-style public houses.

Some of the most popular dining options include afternoon tea at the Grand Hotel, traditional fish and chips on Brighton Pier and the many popular restaurants lining Market Street, George Street, Gardener Street, Union Street, Prince Albert Street, Middle Street, East Street and Circus Parade, as well as the eateries based around Brighton Marina. The Lanes, North Laine (known as the Bohemian quarter) and Preston Street are also home to a wealth of dining establishments, to suit every taste.

Brighton has some of the best cafés, coffee shops, bistros, pubs and restaurants in the area, the most noteworthy of which not only boast great cuisine, but also offer enviable views of the seafront.

If you plan to eat breakfast outside of your hotel, then consider heading to one of the city's numerous coffee shops, which include popular brands like Starbucks, Café Rouge and Goodbean Coffee. Most coffee shops in Brighton open at around 07:30 and serve coffee, hot chocolate, teas and a wide choice of pastries. Other breakfast options include a number of centrally located cafés, bars and hotels, where full-English fry-ups certainly mean that you can start the day with a full stomach.

Lunch in Brighton sees the local bistros, cafés and pubs becoming busy, often offering enticing and affordable lunchtime menus, such as Wetherspoon's West Quay pub at the Marina Village. Lunch is generally taken between 11:30 and 14:30. A number of cafés in the centre of Brighton and Hove, and also on the seafront, have seating areas on the wide pavements outside. Café culture is particularly understandably during the summer months.

Brighton offers a number of fast-food restaurants and bakeries, which are perfect for a seaside picnic. Familiar names include the likes of McDonald's, Burger King, Uncle Sams, KFC and Dominos Pizza, as well as over 50 fish and chip shops, some 30 Chinese takeaways and a similar number of Indian takeaways. Brighton also has numerous kebab shops and charcoal grills, suiting the late-night crowd.

There are countless public houses in and around Brighton and Hove, the best of which include the Lion and Lobster on Sillwood Street, the Brunswick on Holland Road, and the Sussex Cricketer on Eaton Road in Hove, which is managed by the Ember Pub and Dining company.

Often with extensive menus, including many traditional favourites such as large portions of steak and kidney pie, steak and chips, faggots, roast dinners, fish and chips and simple bar snacks, public houses and wine bars in Brighton offer excellent value. Many pubs also feature pleasant beer gardens or outside eating areas, with some even overlooking the lengthy seafront.

Brighton restaurants generally open for dinner at around 17:30 or 18:00 and stay open until roughly 23:30 or later, although many dining establishments open throughout the day during the busy summer season, catering to the crowds of holiday makers.

Highly recommended is the Havana on Duke Street, the Meadow Restaurant on Western Road, and Pascals Brasserie on Queen's Place, where French-style dining is the order of the day, along with popular Sunday roasts. Ranking amongst the best top Italian eateries, Marrocco's on the King's Esplanade is also more than worthy of a mention.