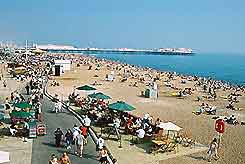 Regarded by many as being the gay capital of England, Brighton and Hove draws crowds of same-sex couples and LGBT visitors throughout the year, with more than one in every 100 residents being openly gay. This exciting seaside city is famous not only for its welcoming, open-minded community, but also for its free-thinking attitude, bohemian vibe and numerous locations where civil partnership ceremonies often take place, at venues such as the seafront Drakes Hotel, the Mercure, the Thistle and the Hotel Seattle, which overlooks the marina.

For a gay themed civil ceremony with a difference, consider getting married at the rather spectacular Royal Pavilion, which is without question one of the most unusual and extravagant buildings in the UK. Alternatively, consider a ceremony at the Stanmer Manor House, on the very outskirts of the city, or at the more centrally located Brighton Town Hall, where the Mayor's Parlour regularly hosts such events and gatherings. Civil ceremonies in Brighton are even now available on the pier, at the racecourse, at the Sea Life Centre and at the Sussex County Cricket Ground, providing plenty of choice and diversity.

With many LGBT bars, clubs and hotels, Brighton has a thriving gay and lesbian community based in and around Kemp Town, St. James's Street and the Old Steine area. Also, Telscombe Cliffs, close to central Brighton, is a private beach attracting mainly gay couples enjoying a summer break in this famous resort. 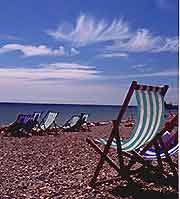 Address: 6 Bartholemews, Brighton, BN1 1HG, England
Tel: +44 (0)1273 775939
The highlight of the gay and lesbian year in Brighton and Hove is the Pride Festival, which has its origins in the early 1970s and currently takes place in early August. With large parades, carnivals and all manner of related festivities, this event always attracts large crowds and although historically completely free of charge to all attendees, admission fees were introduced in 2011.

The carnival-style LGBT community procession usually begins at Madeira Drive in the morning and winds its way to Preston Park, taking around two hours to reach this destination. A large stage at Preston Park becomes central to the celebrations and often features some well-known headlining stars, performing to crowds in the region of 30,000 people. In the past, these have included names such as Alison Moyet, Paloma Faith and stars from ITV's 'The X Factor' music competition. There are also various cabaret acts, performing drag queens and blessing ceremonies.

Brighton Pride's enormous gay festivities bring with them a huge boost to local businesses, with hotels, guest houses, eateries and bars all quickly filling up for the duration of the event. At the beginning of February, Brighton sees the arrival of its Winter Pride, which is on a far smaller scale than the summer version and has been held annually ever since its inception in 2005. There is even a fun dog-themed Doggy Pride event each July.