Brighton boasts a lengthy history with a noted Roman heritage (on the south side of Preston Park), and today many old landmarks remain standing, adding character to the city. Formerly a fishing village, Brighton became famous for being a health resort during the 18th century and soon grew to one of England's biggest towns.

The Royal Pavilion is without doubt one of the most beautiful and unusual landmarks in the Brighton and Hove area. With striking Indian architecture, finely decorated interiors with strong influences from China, the Pavilion was actually built for King George IV and has also been used by many other members of the royal family, including Queen Victoria. 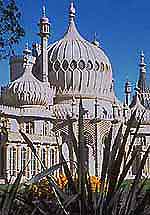 Address: Pavilion Gardens, Brighton, East Sussex, BN1 1EE, England
Tel: +44 (0)1273 290900
The Royal Pavilion was originally a large farmhouse and was transformed in the early 19th century, becoming one of the most popular tourist attractions in the United Kingdom. Recently restored at a cost of more than GBP 10 million, other attractions at this important landmark include the Queen Adelaide tea room, the beautiful Regency gardens, a Pavilion gift shop, and public guided tours. The Royal Pavilion is situated in the city centre and has become synonymous with this seaside resort, regularly appearing on postcards.
Open hours: April to September, daily - 09:30 to 17:45, October to March - 10:00 to 17:15
Admission: charge, discounts available for children 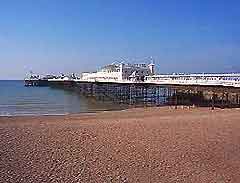 Address: Brighton, East Sussex, BN2 1TW, England
The Brighton Pier, formerly known as the Palace Pier, is one of the most important landmarks in East Sussex and is located in the centre of the seafront. Home to an enormous amount of attractions, including arcades with state-of-the-art video games, a funfair with a mini-roller coaster, dodgems and other exciting rides, side stalls, a restaurant with stunning sea views, fast-food outlets, bars, seasonal fireworks displays and much more besides.
Open hours: daily, 09:00 to midnight, winter - 10:00 to midnight
Admission: free

Address: Kings Road, Brighton, East Sussex, BN1, England
The West Pier in Brighton city centre is now a Grade 1 listed building. Dating back to 1866, this historic structure features classical Victorian architecture and was literally built out of the sea, on strong, iron columns. Now sadly neglected, plans to restore the West Pier and its theatre are well underway. 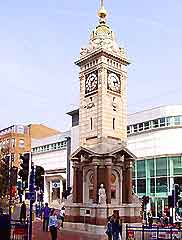 Address: Junction of West Street and Queens Road, Brighton, East Sussex, BN1, England
Located in the heart of the city centre, the Clock Tower was built in 1888 to celebrate the Golden Jubilee of Queen Victoria. The Clock Tower quickly became one of the most recognisable landmarks in the city and features carvings of Queen Victoria, Prince Albert, their son Edward, and four boats which point towards the seafront.

Address: Foredown Road, Portslade, Brighton, East Sussex, BN41 2EW, England
Tel: +44 (0)1273 292092
Foredown Tower, on the west side of Brighton, is home to an important camera obscura - a Victorian group of lenses that project and reflect images of the surrounding area on to the interior of the tower. Other attractions here include a water station and hands-on computer exhibits. Of note, Foredown Tower is situated close to the Portslade train station.
Open hours: Thursday to Sunday - 10:00 to 17:00
Admission: charge 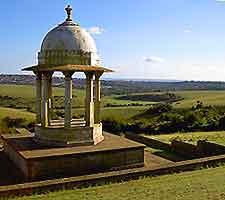 Address: Patcham, Brighton, East Sussex, BN1, England
The important Chattri Monument stands on the north side of Brighton, close to the South Downs area. Commemorating the lives of Hindu and Muslim soldiers who died in the local hospital during the first World War, the Chattri Monument was built on the spot where their bodies were cremated. Opened in 1921, the Chattri Monument features spectacular views across the surrounding countryside.

Address: Kings Road Arches, Brighton, East Sussex, BN1, England
The Brighton Doughnut is one of the most instantly recognisable sights and can be found on the seafront. Donated by the Mayor of Naples, this large, circular sculpture is green and is within easy reach from the city centre.

Address: Kings Road, Hove, Brighton, East Sussex, BN1, England
The Peace Statue is a striking monument to King Edward VII and was built in the early 20th century. Located on the Brighton seafront, the Peace Statue is a large angel, holding symbols of peace.