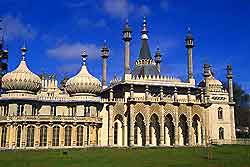 The earliest settlements in Brighton are thought to date back to the Neolithic period, while Iron Age settlements have also been found. Sitting high above sea level, the first residents enjoyed fine panoramic views of the English Channel.

Archaeological investigations have also revealed Roman villas and Romano-British farms. However, it's not until the 11th century that Brighton makes an appearance in written history.

In the Domesday Book of 1086, Brighton is noted as 'Bristelmestune'. It appears to have already been established for some time as a fishing community and an annual gift of 4,000 herring was required of its fishermen.

The most notable event in Brighton's early history is an attack on the town, perpetrated by French raiders in 1514. The town was razed to the ground. Indeed, only parts of St. Nicholas Church and the original layout of The Lanes survived the attack. 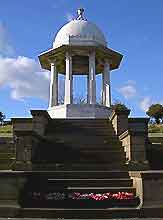 From Royal Residence to Tourist Town

Until the end of the 17th century, Brighton remained a small fishing town. Within a few decades, though, it was to be transformed into one of England's most fashionable resorts. In the 1740s, a doctor from nearby Lewes, Dr. Richard Russell, started to prescribe an unusual medicinal treatment - Brighton's seawater. He built a house on the seafront and from here, treated invalids with curatives that included drinking the water and bathing in it, something which necessitated the invention of the bathing machine.

The Prince Regent, later to become George IV, first discovered Brighton in 1783. He soon found that this new pleasure resort was indeed to his taste and, a short time later, built a permanent place of residence here. During the early 1800s, the Royal Pavilion was constructed on the site of this original house. His patronage sealed the town's success as a fashionable 'watering place'. The Theatre Royal opened in 1807. Shortly after, it was joined by the Brighton Dome and St. Annes Well Spa, which was originally used as a pump room.

It wasn't until the early 1840s, however, that the town really 'took off' as a place of mass tourism. The arrival of the railway line and station in 1841 at last gave more people a chance to visit Brighton as a day trip. In fact, it soon acquired a reputation for being 'London by the Sea'. In 1864, the Grand Hotel was built. Later, Brighton Pier (then known as the Palace Pier) was added to the town's attractions.

The town's economy flourished. By 1851, Brighton had grown to such an extent that it was noted as having the 17th largest population in the country. It even had a blossoming locomotive-building industry of its own. 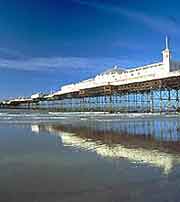 More recent history includes the rivalry that took place between the 'Mods' and 'Rockers' during the 1960s. The most famous of these was the Quadrophenia Battle of May 1964. During the 1970s, Brighton became more than a seaside resort - it also became a popular conference centre, staging many British political party gatherings.

At a conference for the Conservatory Party in 1984, the Grand Hotel where Prime Minister Margaret Thatcher was staying was bombed by the IRA, although this assassination attempt failed. In 1997, Brighton and nearby Hove were united as one town, which was granted city status by Queen Elizabeth II in 2000.