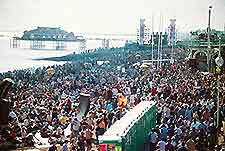 Although families come here in their droves each summer for the seaside fun that Brighton has to offer in spades, the city also boasts a more than reasonable events calendar, offering things to do and plenty of choice for much of the year. Each May, the Brighton Festival is the premier event and crowd-puller, while August sees the arrival of the Lewes Guitar Festival and also the medieval festivities hosted by the Herstmonceux Castle.

During the events, many nightclubs in the city draw the younger crowds, while in the summer, further possibilities include open-air cinema screenings and events staged at the Ellipse venue. There are also various performances at the Brighton Centre, which is sited on King's Road, alongside the seafront and close to the Churchill Square Shopping Centre. For live music, Concorde 2 on Madeira Drive currently ranks as the premier music venue and nightspot.

Address: Brighton, BN1 4EE, England
Tel: +44 (0)1273 709709
The Brighton Festival is a popular annual event held over three weeks in May. With thousands of people participating, events include concerts, numerous theatrical performances, colourful parades, street entertainers and dancing events, most of which are held at the city's premier venues, such as the Corn Exchange and the Theatre Royal.

Address: Friar's Walk, Lewes, Brighton, East Sussex, England
Tel: +44 (0)1273 477356
Staged in early August each year, the Lewes Guitar Festival is held in the Lewes area and features a number of lunchtime and evening guitar concerts, performed by many world-class musicians, as well as a series of workshops and musical events.

Address: Wartling Road, Herstmonceux Castle, Brighton, BN27 1RN, England
Tel: +44 (0)20 8416 0398
Held in August each year, the Herstmonceux Castle Medieval Festival is actually the largest medieval celebration of its kind in the whole of the United Kingdom. Set in this atmospheric castle, to the east of central Brighton, this family friendly annual event comes with music, knights, archery events, food and drink, market stalls and more.

Address: Kings Road, Brighton, East Sussex, BN1, England
The Ellipse is situated on the seafront. This large, open-air venue is home to many exciting events throughout the year, including concerts, live entertainment, radio shows, dancing, demonstrations and exhibitions.