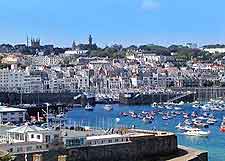 One of the famous Channel Islands and second only in terms of size to Jersey, Guernsey is the perfect island resort, with spectacular beaches and a definite subtropical feel. The mild winters and endless summer sunshine see a stream of tourists arrive, to enjoy the peace and tranquility offered on Guernsey, along with many scenic cliff top walks, prehistoric remains, woodland valleys, secluded coves and superb sandy beaches, with interesting rock pools just waiting to be explored at beaches such as l'Eree and Saints Bay.

Vazon Bay is home to the biggest beach on the island and this award-winning sandy stretch is suitable for sunbathing, paddling and even surfing. Tourism is just one of the numerous industries on Guernsey, with others include farming of Guernsey cows, as well as exporting tomatoes, carnations, freesias and roses on a massive scale. The Visit Guernsey tourist information centre is located in St. Peter Port, the island's capital town.

Located on the southern side of the island and within the parish of Forest, the island's only airport is just under 5 km / 3 miles from St. Peter Port, which lies to the north-east. Daily flights to Guernsey arrive from English airports, as well as from a small number of airports based in France, Germany, Ireland, Spain and Switzerland. Alternatively, regular ferries sail most days from Portsmouth, Poole and Weymouth, stopping at both Guernsey and Jersey, before finally reaching the seaside city of St. Malo in France. These include both standard and high-speed catamaran ferries. 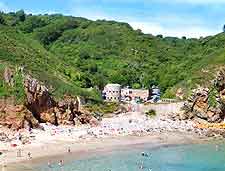 St. Peter Port is located on the eastern coast of Guernsey and is where you will encounter the best selection of shops, restaurants, hotels and tourist attractions. The compact town centre is just a short walk from the harbour and several enticing beachfronts, such as those at Belle Greve, Havelet and Soldiers Bay. Close by and within the La Vallette area of St. Peter Port, Guernsey Aquarium is always worth exploring. Also in the town is the acclaimed Guernsey Tapestry, which was created to celebrated the turn of the millennium, and the St. James Concert Hall, where live music events are regularly staged. More information about Guernsey Tourist Attractions. 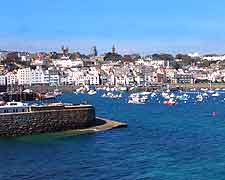 The coastline of Guernsey has been shaped by many important events in history, with various castles and fortifications added over the years, especially the German fortifications of the 1940s. Castle Cornet is one such landmark and this important and historical harbour fortress comprises several museums, reconstructions and historical information. Also prominent on the island is the Pleinmont Observation Tower, along with Victor Hugo's Hauteville House, the ruined 14th-century Vale Castle, and Sausmarez Manor, a 12th-century stately home with glorious formal gardens and its very own Sculpture Park. More information about Guernsey Landmarks. 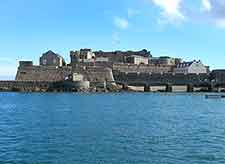 Museums are plentiful around Guernsey and celebrate the island's culture and past traditions. Learn more about the island at the National Trust of Guernsey Folk Museum, or at the Fort Grey and Shipwreck Museum, which stands next to the Hanois reefs, the cause of many historical shipwrecks. The Guernsey Museum and Art Gallery is situated within Candie Gardens in St. Peter Port and was founded in 1978, being responsible for staging various exhibitions of art within its Rona Cole Gallery and Brian White Gallery. Located in La Vassalerie, the German Military Underground Hospital may also be of interest. More information about Guernsey Museums and Art Galleries. 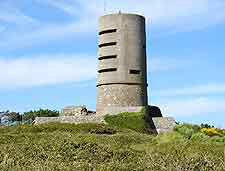 Ferries connect many of the neighbouring Channel Islands, with day trips from Guernsey connecting destinations such as St. Helier on Jersey. St. Helier is the capital of Jersey and close to an endless number of attractions, such as the Jersey War Tunnels, the world-renowned Durrell Wildlife Park, and the bays of St. Aubin's, Havre des Pas and St. Clements. The small island of Sark is even closer to Guernsey and offers perhaps the ultimate in respite, being completely car free and governed by the Seigneur, which resides within La Seigneurie Manor. If you have time, you may wish to also visit Alderney and Herm, or the French port city of St. Malo, in nearby Brittany. More information about Guernsey Attractions Nearby. 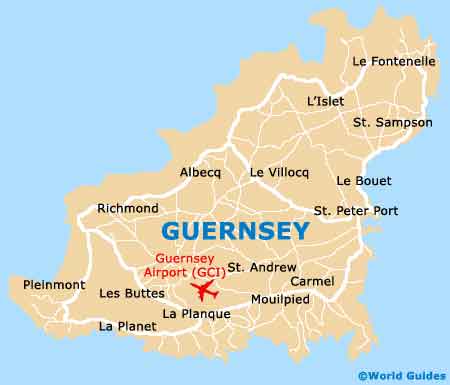