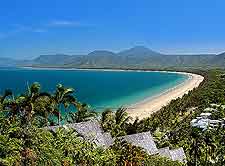 A wonderful part of the Tropical North where many tourists choose to take a holiday, Port Douglas grew in status during the gold rush of the 1870s. Port Douglas is now a popular gateway to leading attractions such as the Great Barrier Reef, the Daintree National Park and the Atherton Tableland, although visitors also come here simply to spend time relaxing on its famous Four Mile Beach, which is edged by mature palm trees and the Coral Sea.

For the very best views of the Port Douglas coastline, the Flagstaff Hill Lookout is the place to visit. For a different perspective, cruises are readily available and head to destinations such as the Low Isles and Cape Tribulation. Scuba diving and snorkelling cruises to the Great Barrier Reef are understandably an important part of the local tourism industry, since this underwater attraction remains World Heritage listed, being the largest and most complex coral reef anywhere in the world. Advice on cruises, sightseeing tours and general tourist information is to be found at the Port Douglas Visitors Centre on Macrossan Street. 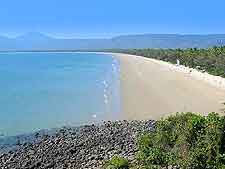 Easily reached by using the Captain Cook Highway, the attractions of Port Douglas tend to make the very most of the surrounding coastal scenery, with Rex Smeal Park being conveniently close to the beach. Families will always remember spending time at the Rainforest Habitat Wildlife Sanctuary, where it is possible to hand-feed the friendly kangaroos and watch koalas climbing eucalyptus trees. Departing from the Marina Mirage Station, a trip onboard the Bally Hooley Steam Railway is recommended for all ages, as are cruises to the Low Isles - part of a Marine National Park Zone. Fishing trips provide a memorable holiday experience, with Marlin and Tuna fish being prized catches for keen anglers. More information about Port Douglas Tourist Attractions. 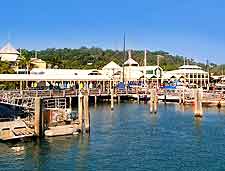 The very best way to learn about the rich heritage of the town is to take a stroll along the self-guided Port Douglas Historical Walk, which was originally laid out by the local Douglas Shire Historical Society. This trail will lead you past many of the town's most prominent sights and tourist attractions, with signposts conveniently located at each point of interest, providing information and past photographs. Highlights along the Port Douglas Historical Walk include the former Court House, the St. Andrew's Anglican Church, the Flagstaff Hill Lighthouse, the Red Road (Davidson Street), the Bank of New South Wales (Clink Theatre), the Waterfront Precinct, the Caledonian Hotel and St. Mary's by the Sea Church. More information about Port Douglas Historical Walk. 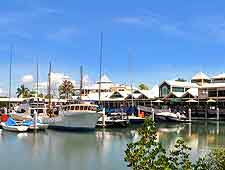 There really is only one museum in town to speak of - the Court House Museum on Wharf Street, which is located close to Port Douglas Park and the Club Tropical Resort. The building itself is of great local historical significance, since it dates back to the 1870s and remains in an excellent state of repair. Visitors to the Court House Museum will not only learn about local history, but also of murderer Ellen Thompson, who was found guilty here in 1887 and hanged soon after. If you are looking for galleries in Port Douglas, then Macrossan Street and the marina are reliable places to find Aussie art works at affordable prices. More information about Port Douglas Museums. 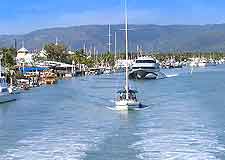 Plenty of excursions are available, should you decide to venture outside of Port Douglas for the day. The coastline of Far North Queensland is punctuated with a number of enticing towns and resorts. Tourists often make the most of the town's proximity to the city of Cairns, which is only a little more than an hour away and packed with quality attractions, such as a huge artificial lagoon and the Skyrail Rainforest Cableway. Situated to the north-west of Port Douglas is the World Heritage Site of the Daintree National Park, where notable highlights include the Great Dividing Range and the Mossman Gorge. For nearby beaches, consider Bailey Creek, Cape Kimberly, Cow Bay, Palm Cove and Thornton Beach. More information about Port Douglas Attractions Nearby. 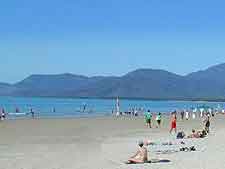 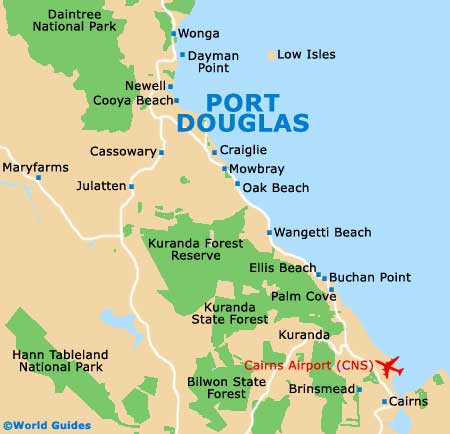