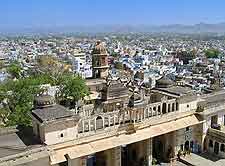 A very serene and romantic Indian city, Udaipur has been shaped by commercial tourism in recent years, although does still manage to retain much of its earlier charm, away from its main tourist epicentre. The appearance of Udaipur really does depend on how heavy the monsoon rains were, since these fill up its beautiful Lake Pichola.

Around the very edge of Lake Pichola are a series of striking marble temples and other structures, will on Jagniwas Island, in the lake itself, the aptly named Lake Palace is enormous and currently operates and one of the world's most luxurious hotels. Tourism information in Udaipur comes in the form of the well-equipped Tourist Reception Centre, which resides within the Fateh Memorial Building. 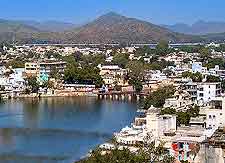 James Bond buffs may well recognise Udaipur's famous Lake Palace, since it made an appearance in the past 'Octopussy' movie, which was filmed on location in Udaipur itself. Boat rides depart regularly from the jetty next to the City Palace and transport passengers to Pichola's further island of Jagmandir. Fateh Sagar Lake is another notable tourist attraction in Udaipur and its garden island of Nehru is nothing short of an exotic paradise. Families will always enjoy spending time at the Gulab Bagh Zoo, next to Lake Pichola, where Indian tigers and other exotic animals live. More information about Udaipur Tourist Attractions. 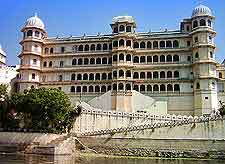 Udaipur was established in the middle of the 16th century by the Maharaja Udai Singh II and this important many is responsible for much of its appearance today, building grand palaces and magnificent temples. The lakeside City Palace is perhaps to most ostentatious and remains the biggest of its kind in Rajasthan, dominating the area with its imposing architecture. Next to the City Palace, the Jagdish Temple is known in Udaipur for its exceptional stone carvings, while both the Sajjangarh Fort and the Neemach Mata Temple offers some quite awesome views. More information about Udaipur Landmarks and Monuments. 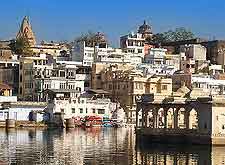 Within the large city of Udaipur, tourists will find a number of quality museums, offering information about everything from Rajasthani archaeology to tribal life and folk arts. The neighbouring Ahar Archaeological Museum stands out and resides on the outskirts of Udaipur. Within the City Palace itself are a number of worthwhile museums, such as the Government Museum, where you will find portraits showing some of Udaipur's larger-than-life maharajas, dressed in extravagant clothing and sporting huge moustaches. The City Palace Museum itself is on hand and contains some very impressive mosaic peacocks. More information about Udaipur Museums. 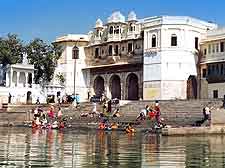 Rajasthan is brimming with a whole heap of quality attractions, and so many tourists choose to base themselves in Udaipur and take full advantage of the Indian sights on offer. Jaisamand Lake is one to add to your list of places to visit and this man-made lake is located alongside the very family-friendly Jaisamand Wildlife Sanctuary. Also near to Udaipur are the spectacular perimeter walls of the Kumbhalgarh Fort, which really is of epic proportions. Don't miss a day trip to Mount Abu, or to the giant temple complex within Ranakpur. Further afield, long-distance transport connects cities such as Jaisalmer, which is most famous for its fort. More information about Udaipur Attractions Nearby. 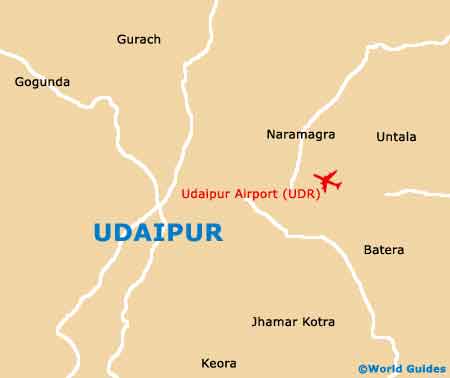