Sited on the western coast of India, Mumbai is located at the southerly tip of Salsette Island, which is shaped rather like a claw. The north of Salsette Island is connected to the mainland by a number of bridges.

One of the most densely populated cities on the planet, Mumbai has a population of almost 12 million people, with the metropolitan area believed to have around 25 million inhabitants. In general, Mumbai is categorised as having two distinct regions, the city itself, and the many outlying suburbs.


Mumbai enjoys a peninsula setting, with the western side of the city being edged by the Arabian Sea, while to the east, the Thane Creek separates the city from New Bombay (Navi Mumbai) and the Raigad district. Being a coastal city, much of the soil around Mumbai tends to be fairly sandy, with the shoreline featuring some particularly appealing secluded bays, mangrove forests and swamps.

Both Chowpatty Beach and Juhu Beach are especially popular and lie along the western coast, enjoying plenty of sunshine. Three fairly small rivers wind their way around the city, while five lakes supply the majority of the water to the city of Mumbai.

One of the best maps of the area is the 'Eicher City Map of Mumbai'. This is the most detailed and comprehensive city map and is worth purchasing if you are spending more than just a few days here. 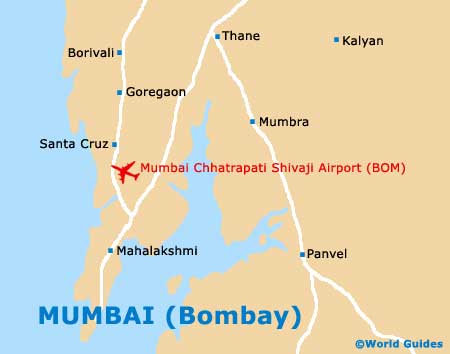