Durban Weather, When to Go and Climate Information 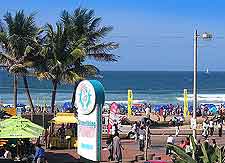 Situated on the KwaZulu-Natal coast, Durban is something of a holiday Mecca. Visitors come to enjoy its subtropical climate and its average of 320 days of sunny weather a year.

Even in the winter months, temperatures remain high enough for visitors to enjoy Durban's beaches. In fact, the climate in Durban really does make the city a good all-year-round holiday destination. Rainy weather is at its least between April and September, with June being the driest month and seeing a precipitation of just 28 mm / 1.1 inches. 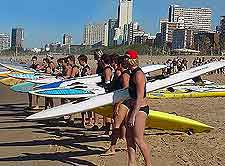 Summers in Durban (December to February) are hot and humid, and very sunny. Temperatures frequently rise above 30°C / 86°F. From November through to March, tropical thunderstorms strike on a more or less daily basis, generally during the afternoon. However, they do not usually have a great impact on what are generally sunny days.

The winter climate, between June and August, is characterized by mild or even warm temperatures. Indeed, winter temperatures during the day are often in excess of 20°C / 68°F. The nights are also generally warm. In contrast to the summer weather, Durban is rarely bothered by rain during the winter.

The months between autumn and spring are seen by many as the best time to visit Durban and the surrounding area, as temperatures tend to be a little lower than in the summer.