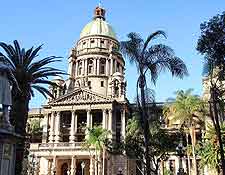 Domestic passengers formed the vast majority of the five million+ people who entered the King Shaka International Airport during its first full year of operation. Dubai is currently the only direct destination. The facility has already become South Africa's third busiest and ranks among the ten busiest airports on the entire continent.

Three major roads surround the site on three sides, while the Mdloti River estuary forms the southern boundary. The M43 lies to the north, the N2 motorway travels east and the R102 heads west. Driving in Durban and the surrounding Zululand region is fairly easy, although car hire companies will expect their vehicles to be returned directly to their offices. Those wishing to take taxis have about six different companies to choose from.

At least three different private shuttle bus companies serve the airport in addition to numerous hotel shuttle bus services. Wheelchair ramps and closed circuit cameras are installed in each of the People Mover buses, which run every 15 minutes and stop at most major Durban attractions. Mynah and Aqualine are the buses which travel to Durban's suburbs, but their schedules can be confusing for first-time visitors.

The airport has no direct rail service, but Durban's main train station stands in the heart of its city centre. MetroRail trains travel throughout the city's suburbs and to nearby smaller towns, while Spoornet trains travel daily to Johannesburg and weekly to Cape Town. Several smaller South African cities can also be reached aboard Spoornet trains.