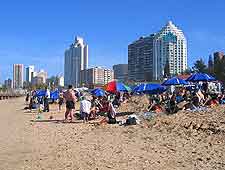 Durban's beaches and waterfront are without doubt the city's most distinctive landmarks. For many people, they are the city's major attraction.

However, it's also worth venturing inland, into the city centre, to explore Durban's many historical monuments. Most notable of these city landmarks is the very distinctive City Hall, which is around 100 years old and sports a particularly eye-catching dome, along with stone columns and palatial architecture. 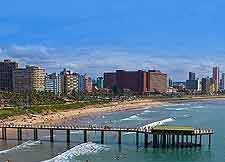 Address: Golden Mile, Durban, South Africa, SA
This popular stretch of sandy beach runs from South Beach to the Suncoast Casino and Entertainment world to the north. Thousands come to the Golden Mile each year to sunbathe or enjoy surfing and swimming in the warm waters of the Indian Ocean. The beach is lifeguard patrolled and a net keeps unwanted sharks away from swimmers. The Golden Mile is a popular place to stay, eat out and party the night away.
Open hours: daily
Admission: free

Address: Victoria Embankment, Durban, South Africa, SA
Victoria Embankment ranks among Durban's most famous streets. Also known as the Esplanade, it stretches along the Bay of Natal. Whilst some of the original Victorian landmark buildings perch on the coastline, they are somewhat overshadowed by skyscrapers. The views of the bay at nighttime are worth a special trip.
Open hours: daily
Admission: free 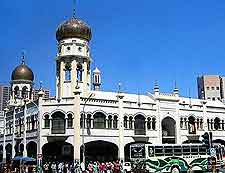 Address: Grey Street, Durban, South Africa, SA
Tel: +27 031 304 1518
A visit to Durban's Indian district is a must, not least because this is the home of the Juma Musjid Mosque, reputed to be the largest in the Southern Hemisphere. It is certainly an impressive sight, from its ornate minarets to the marble worship hall inside.
Open hours: Monday to Friday - 09:00 to 21:00
Admission: free 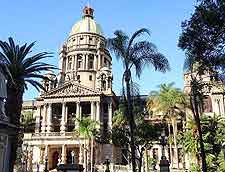 Address: Smith Street, Durban, South Africa, SA
Tel: +27 031 311 1111
Look out for the distinctive copper dome of Durban's City Hall. Said to be based on the design for Belfast's City Hall in Northern Ireland, the City Hall was built in 1910 and is perhaps the city's most famous heritage landmark. It is currently home to the city's Municipal Library and National Science Museum. It's well worth taking time out to visit the library and auditorium.
Open hours: daily
Admission: free 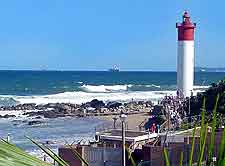 Address: Umhlanga, Durban, South Africa, SA
The beach at Umhlanga is dominated by its distinctive lighthouse, situated on the picturesque promenade. Completed in 1954, the tower displays a fixed red light as a warning device for ships that are anchored too close to the shore. Unusually, the lighthouse has never had its own lighthouse keeper. Instead, the lights are operated from the nearby Oyster Box Hotel.
Open hours: daily
Admission: free

Address: 55 Gillespie Street, Durban, South Africa, SA
Tel: +27 031 332 4324
The Wheel is a shopping and cinema complex that can be easily distinguished by a giant Ferris wheel over its entrance. Located within Gillespie Street and next to the Marine Parade, the Wheel complex is home to almost 150 different shops and eateries, while its multi-screen cinema regularly shows the latest movies.
Open hours: Monday to Saturday - 09:00 to 17:00, Sunday - 10:00 to 15:00
Admission: free