Durban Events, Things to Do and Festivals 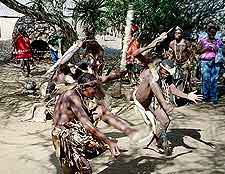 Durban is a city that certainly enjoys its arts, culture and sport. As you'd expect then, Durban plays host to a busy calendar of film festivals, lively fairs, sporting events, large exhibitions, concerts and theatre performances.

A free monthly publication detailing 'what's on' in Durban is available from the city's tourist office and offers the very latest in the way of things to do during your holiday, detailing the main South Africa festivals to watch, and any fun local events that you might wish to become a part of.