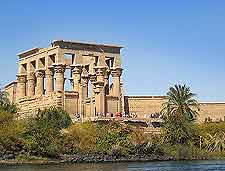 There are many spectacular Egyptian landmarks spread around Aswan, being a mixture of both ancient monuments and more modern structures. The Philae Temple is one such landmark near to Aswan and has led an interesting history, being constructed to honor the Egyptian goddess Isis, more than 2,600 years ago.

Other landmarks of the past include the Monastery of St. Simeon, the Mausoleum of the Aga Khan and also the Tombs of the Nobles, which have been cut into the high cliffs and dominate much of the Nile's West Bank from their elevated position. More recent additions to the skyline of Aswan include the lotus-shaped Egyptian Russian Friendship Monument, and the awesome riverfront Coptic Orthodox Cathedral. 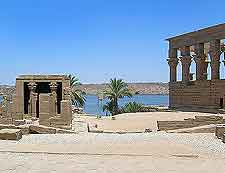 The Philae Temple is an ancient landmark and stood on Philae Island for most of its life, close to central Aswan, although its future became threatened after the completion of the Low Dam, when the island remained flooded for much of the year. During this time the architecture was strengthened, although the Philae Temple began to suffer from erosion. Some reliefs were simply washed away and many lower bricks were completely encrusted with silt from the Nile. By 1960, it was decided by UNESCO that the temple should be relocated, so that it could be preserved for future generations. It was successfully moved to the nearby island of Agilkia at the end of the 1970s and completely reassembled.
Open hours: daily
Admission: charge 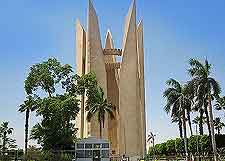 Located on the west bank of the River Nile, the Egyptian Russian Friendship Monument is situated close to the High Dam and is hard to miss, being built to commemorate Russia's involvement when the dam was constructed . Based upon the five petals of an actual lotus flower, this Egyptian Russian Friendship Monument towers more than 70 metres / 230 feet into the air. An observation deck stands part way up and offers some impressive panoramic vistas across the Dam and beyond.
Open hours: daily
Admission: free 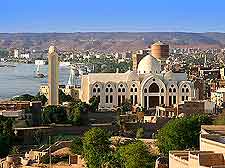 Archangel Michael's Coptic Orthodox Cathedral is a stunning modern landmark and enjoys a beautiful setting next to the River Nile. Consecrated at recently as 2006, the cathedral boasts a set of twin towers, some elaborate stone carvings and many huge, arched windows, being topped with a simple white dome. Despite its relative youth, the architecture of the Coptic Orthodox Cathedral is very traditional and once weathered, will no doubt seem quite historical in its appearance.
Open hours: daily
Admission: free 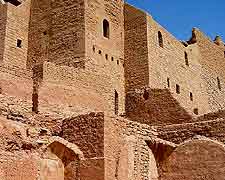 Address: Deir Amba Samaan, Aswan, Egypt, EG
The Monastery of St. Simeon dates as far back as the 7th century and as such is amongst the best preserved of all Egypt's Christian landmarks and strongholds. Surrounded by sweeping expanses of desert sands, the Monastery of St. Simeon boasts some wonderful views and can be reached by boat and then by either camel or donkey. The monastery was enclosed by walls measuring some 10 metres / 33 feet, and comprises of two floors, with the lower level being constructed of tone, and the upper floor from mud bricks.
Open hours: daily, October to May - 08:00 to 16:00; June to September - 07:00 to 17:00
Admission: charge, discounts for children and students 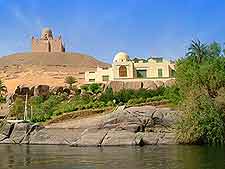 Mausoleum of the Aga Khan

The Mausoleum of the Aga Khan is an important landmark in the Aswan area for many reasons and its beautiful pink granite facade can be seen for miles, being perched atop a small hill. The Aga Khan was an exceptionally wealthy Egyptian and lived close by, in a large white villa. Visitors are able to the steep pathway and visit the actual tomb of Aga Khan, which is made of white Carrara marble. When his wife was alive, she used to lay a single red rose on his tomb every single day (sometimes flying them in from Paris when they are not available in Egypt) and this practice is still carried out today.
Open hours: daily
Admission: free 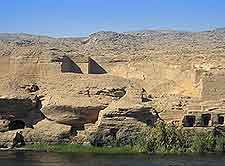 Tombs of the Nobles

Standing directly north of Kitchener's Island and to the north of Aswan itself, the Tombs of the Nobles are brimming with endless landmarks and tombs of important Egyptian individuals. These range from princes and governors (nomarchs), to Elephantine dignitaries and keepers of the Gate of the South. In total, six of the Tombs of the Nobles are actually open for members of the public to explore, dating back as far as the Old Kingdom and including the Tomb of Harkhuf, the Tomb of Hekaib, the Tomb of Sarentput I and the Tomb of Sarentput II. The attractions are accessed through a simple entrance hall, with a corridor leading to the actual burial chamber. Those visiting the Tombs of the Nobles will arrive by ferry and find a stairway close by, leading up the hill from the ferry landing, linking the tombs directly and making them easily accessible.
Open hours: daily, October to May - 08:00 to 16:00; June to September - 08:00 to 17:00
Admission: free