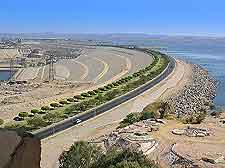 There are some truly extraordinary tourist attractions dotted around Aswan, ranging from classic Egyptian camel rides and cruises along the River Nile, to one of the world's biggest dams and man-made lakes, Lake Nasser. The weather in Aswan can be hot for much of the year and so swimming in another popular attraction, with many hotel swimming pools being open to the public for just a small charge - swimming in the River Nile is not recommended.

A good way to get to know Aswan is to take a stroll along the Cornich El Nile, while to learn more about the region's past and historical attractions, tourists should take a boat trip and visit the Nubian villages of Koti and Soti, which are to be found on Elephantine Island, in the middle of the River Nile.


Don't forget to check out the famous the enormous Unfinished Obelisk in Aswan's Northern Quarries. It is widely believed that is this Unfinished Obelisk completed, it would have been amongst Egypt's very biggest hand-carved attractions and weighed more than 1,100 tonnes, making you wonder how it could ever have been safely transported to its intended site and subsequently erected. 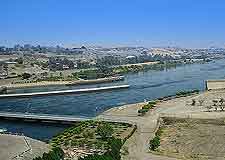 Many tourists visiting Aswan come to marvel at the High Dam, which has become somewhat of a local attraction in its own right. Built to control the summer flooding on the River Nile, construction of the Aswan High Dam commenced in 1960 and just four years later, the first phase was reached and the Lake Nasser reservoir began to fill. However, it was not until 1970 that the High Dam finally completed in its entirety and by 1976, the reservoir has reached capacity. More than 35,000 people were involved in the construction of the High Dam, which has become a huge source of energy in Egypt, and before the floodwaters of Lake Nasser arrived, no less than 24 different major archeological sites and temples were successfully relocated, so that they would not be lost beneath the waters forever.
Open hours: daily - 24 hours
Admission: free 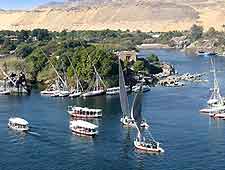 Cruising on the River Nile / Feluccas

There are literally hundreds of different cruise boats operating on the River Nile and Aswan is home to more than its fair share. Many boats regularly arrive from as far away as Luxor, and include some enormous steamer boats, which are effectively floating hotels. Day trips are regularly available on traditional Egyptian sailing boats known as 'feluccas' (small), and also on 'dahabiyyas' (large), both of which make for a truly memorable holiday experience.
Open hours: daily, hours vary
Admission: charge 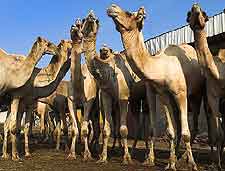 Camel rides are typically aimed at the Egyptian tourist market and this can be a really fun thing to do. Arabian 'dromedary' camels are capable of carrying just one person each, so you can expect a very personal experience! Close to central Aswan, catch a felucca to the West Bank of the River Nile, where camel rides are available at the close by, carrying passengers to the main sights across the desert sands, which include the ancient Monastery of St. Simeon on the Deir Amba Samaan.
Open hours: daily, seasonal variations
Admission: charge 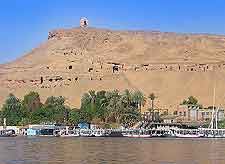 Elephantine Island and the Nubian Villages

Located close to Aswan, slightly further upstream and on the western side of the River Nile, the Nubian Village was relocated when the Aswan Dam can into place. The Nubians are a small Egyptian race, known for their darker skin and prosperity. The further Nubian villages of Koti and Soti often great interest to many tourists and can be found sandwiched between the Movenpick Hotel and the ruins, on the Elephantine Island. All offer a true taste of virtually unchanged Nubian life as it has been for many years. Visitors are always welcomed, especially those bringing gifts and sweets for the children. Unusual attractions at Nubian villages can include everything from ceramic decorations to baby crocodiles, bred for release into Lake Nasser. Elephantine Island lies in the very middle of the River Nile and was once central to life in Aswan. Its plentiful religious attractions and temple remains are extremely historical and the Aswan Museum and the Ruins of Abu. Elephantine Island itself was first settled more than 5,000 years ago and is today quite unmissable.
Open hours: daily - 24 hours
Admission: free 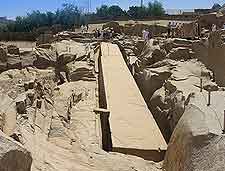 Address: Northern Quarries, Aswan, Egypt, EG
Historically, the quarries of Aswan became the number one source of granite in Egypt and this particular partly carved obelisk has become one of the city's most famous ancient tourists attractions. Offering a true insight into the Egyptian past craft of stone carving, the Unfinished Obelisk is huge and measures almost 50 metres / 160 feet and remains in this state after being abandoned when a noticeable crack appeared in the granite. The Unfinished Obelisk is close to the Fatimid cemetery and lies just 1.5 km / 1 mile from Aswan city centre.
Open hours: daily, October to May - 07:00 to 16:00, June to September - 08:00 to 18:00
Admission: charge, discounts for children and students 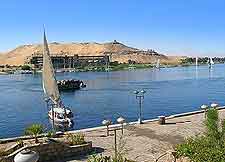 Amongst the main attractions on Sehel Island are the handmade beaded jewellery, which often makes for a very popular souvenir. Tourists should also look out for the innumerable inscriptions, which have adorned the huge granite boulders on Sehel Island for many centuries, depicting a number of historical occurrences, such as the well-documented Famine Stela. Regular boat trips link Aswan with Sehel Island, which is to be found just a short distance to the south of the city itself.
Open hours: daily
Admission: free 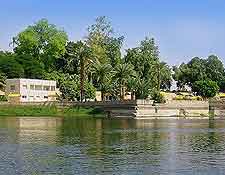 Kitchener's Island also goes by the names of both Plantation Island and the Aswan Botanical Gardens. Lying directly to the west of the Elephantine Island, Kitchener's Island was actually given to Lord Horatio Kitchener at the very end of the 19th century during the time when he was the actual commander of Egypt's army. Lord Kitchener spent many years transforming the gardens into a horticultural wonderland, with flowers and plants from all over Africa, India and beyond. Covering just over 6.5 hectares / 16 acres and now owned by the state, tourists will find that the main attractions at the Aswan Botanical Gardens include endless seasonal flowers, a world-class collection of lush palm trees, more than 400 different species of exotic and subtropical vegetation and picnicking with some exceptional views. The felucca ride to Kitchener's Island itself is also particularly enjoyable.
Open hours: daily, October to April - 08:00 to 17:00; May to September - 08:00 to 18:00
Admission: charge