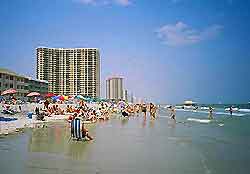 There are literally hundreds of different hotels spread around Myrtle Beach, with lodging rates seeming to vary almost by the week. Myrtle Beach accommodation is at its cheapest in January, being especially expensive during the summer months of July and August.

During the busy summer season, the hotels of Myrtle Beach are in great demand and soon become completely full, meaning that you should always book lodging as far ahead as possible. Accommodation overlooking the Atlantic Ocean (Long Bay) is especially desirable, although you should always expect to pay extra for views and general proximity to the beachfront. 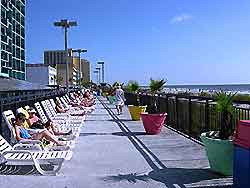 There are also a number of hotels to be found close to the Myrtle Beach International Airport (MYR), which is just 5 km / 3 miles to the southwest of the city center and between the South Kings Highway and Frontage Road East. Accommodation particularly near to the airport comes in the form of the Country Inn on Waccamaw Boulevard (close to the Hard Rock Park). On the South Ocean Boulevard and therefore extremely well-placed for beach-goers is the Days Inn, the Compass Cove Oceanfront Resort, and the Super 8 Motel, all of which are very cheap and basic.

If you are looking for mid-range hotels close to the oceanfront, then it is quite likely that you will consider those along the Ocean Boulevard. Lodging options on the North Ocean Boulevard, such as both the Best Western Carolinian Beach Hotel and the Caribbean Resort and Villas, are close to the Myrtle Square Mall Shopping Center, whilst being just a short distance from the Myrtle Beach Convention Center and the NASCAR Speedpark. 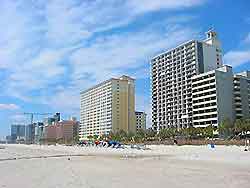 Accommodation on the South Ocean Boulevard enjoys close proximity to the Myrtle Beach Family Kingdom Amusement Park, the Grand Strand Plaza Shopping Center and the Midway Park. Good choices include the highly recommended Sea Crest Ocean Front Resort, the Coral Beach Resort Hotel and Suites, and the Westgate Myrtle Beach Oceanfront Resort. Slightly away from the beach and on the Celebrity Circle, the Hampton Inn is an excellent family hotel, since it is a mere stroll from the 3D IMAX Theater, the Broadway 16 Theaters cinema complex and Ripley's Aquarium.

Luxury hotels in Myrtle Beach are generally concentrated around 48th Avenue North, the Grande Dunes Boulevard and Queensway Boulevard, as well as the Beach Club Drive, which is where the oceanfront Hilton Resort is sited. The Hilton boasts competitively priced four-star accommodation and stands on the northern end of Myrtle Beach, being near to the Kasper Tanger Outlet Mall and the Dunes Golf Course.