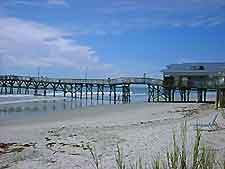 Myrtle Beach is a man-made island and coastal tourist resort, and is located on South Carolina's South Atlantic coast.

The history of Myrtle Beach as an island dates back to 1936, when it was separated from the mainland by the Intracoastal Waterway. However, the land has been occupied for much longer by the Waccamaw tribes, before the arrival of the earliest European settlers.

The first Europeans arrived at the end of the 18th century. Little is known about these people, but from the few records available, it is believed that they were plantation owners who grew crops such as tobacco. Before this time, the coastal area known as the 'Grand Strand' was largely uninhabited, but some early 19th-century residents, such as Mary Withers, are buried at the Prince George Winyah Episcopal Church in the neighboring city of Georgetown, some 36 miles / 58 km to the south. Of interest, the current church was rebuilt in the mid-1800s and is believed to have the longest-running congregation in South Carolina.

During the first half of the 1800s, members of the Withers family were among the few residents on this stretch of coastline. However, they eventually abandoned the area after 18 people perished and their home was destroyed in an 1822 hurricane. Abandoned, the Myrtle Beach area turned back into forest and remained much the same until the arrival of Franklin Burroughs in the late 19th century. Franklin Burroughs was an entrepreneur and a visionary who saw great tourism potential for this part of South Carolina. He passed away in 1897, but left his plans in the capable hands of his sons.

In 1900, a new railway opened, which transported lumber from the coastal terminus to inland destinations. A small community, considered to be the 'New Town', was established around the terminus. This community centered on the Withers Post Office. In 1901, the Burroughs' sons opened the first hotel in the history of Myrtle Beach, named the Seaside Inn. 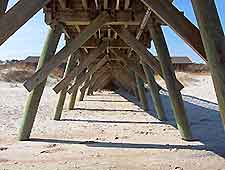 Growth of the City

The 'New Town' envisioned by Burroughs continued to expand during the first part of the 20th century, until it was finally incorporated as Myrtle Beach in 1957. The resort was named after a local bush, the southern wax myrtle, following a suggestion by Burroughs' wife. The Myrtle Beach Municipal Airport was opened in 1937 and was shared with the US Air Force from 1940. The military eventually left in 1993 and the airport was subsequently renamed the Myrtle Beach International Airport. Now, more than one million passengers use the airport each year.

Nowadays, the resort is part of a long stretch of towns that combine to make up the Grand Strand, with Myrtle Beach understandably being one of the most crowded areas. Few people come here to learn about the history of Myrtle Beach. Instead, visitors come for the golf courses, the plentiful seafood eateries and the designer shopping outlets, which together continue to satisfy large numbers of tourists each year. The city is also popular among students as a spring break venue for partying.

While the city's high-rise skyline may not have been what Franklin Burroughs imagined when he first came across this one-time area of overgrown forest, no one can deny that modern Myrtle Beach is among the most fun-packed destinations on this stretch of the South Atlantic coast.