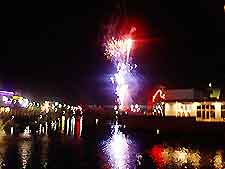 Myrtle Beach comes with a busy calendar of events, with many occasions being golf-related tournaments and competitions, open to both professionals and amateurs.

The coastal location of Myrtle Beach makes this spot an ideal place for outdoor activities and sporty things to do. Noteworthy annual festivals and similar highlights include the Canadian-American Days Festival each March, the Grand Strand Fishing Rodeo in April and the Sun Fun Fest every June, where residents and visitors alike gather together to take part in a range of activities. Also worth making a note of is the yearly Fourth of July Concert at the Memorial Stadium, along with the German-style Oktoberfest in the fall.

Myrtle Beach is also big on charity events, with a number of fundraisers each year attracting huge crowds for worthy causes. Arts and craft lovers won't be disappointed by the choice of annual fairs offering handicrafts, while children are always well catered for.