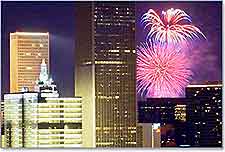 All through the year there are certainly more than just a handful of things to do around the city. Numerous theater events, concerts and festivals are often staged in the city, with the Brady Theater (the city's Convention Hall) enjoying its share of the action.

Opera lovers may like to note that the Tulsa Opera organization was established way back in 1948 and hosts three seasons each year at the Tulsa Performing Arts Center. For something less classical and more family based, the Tulsa State Fair at the end of September has grown to become an enormous event and lasts just under a fortnight. Many of these events take place at the giant Expo Center, which is now often referred to as the QuikTrip Center and also stages various boat, gun and custom car shows.

Each year in early May, the Oklahoma Blues Festival is a major highlight, being followed in August by the Gatesway International Balloon Fest in the neighbouring town of Claremore (roughly 30 minutes away and to the northeast). The month of October sees another major happening in Tulsa, namely the Bavarian-themed Oktoberfest, which ranks amongst America's best and most well-supported, enjoying visitor numbers in the region of 400,000.