Getting Around, Greensboro Travel, Transport and Car Rental 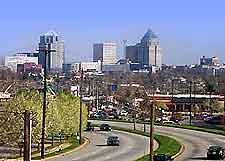 Greensboro is convenient to get to, having an international airport, Amtrak station and Greyhound coach terminal. It is also easy to reach by car from all directions.

Just a few miles northwest of Greensboro, the Piedmont-Triad International Airport serves Greensboro, High Point and Winston-Salem, and has many scheduled flights to and from other American cities daily. There are numerous shuttles which travel into Greensboro, with plenty of taxis awaiting each arrival.

Alamo, Avis, Budget, Enterprise, Hertz, National, Thrifty and other car rental agencies have travel booths at Piedmont-Triad International Airport, as well as offices in Greensboro. This ensures that ordering, picking up and dropping off a rental car is extremely straightforward. 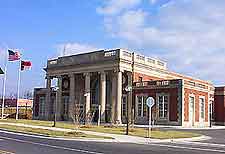 Greensboro is served directly by Greyhound coach services, with the coach terminal located in West Lee Street. The local bus network is frequent and reliable, with several routes crossing the city.

Greensboro has its own Amtrak station on Oakland Avenue, and there are daily services running to destinations north and south, which serves cities from New York to Charlotte and beyond.

There are several taxi companies operating in Greensboro, with taxis found at designated taxi stands throughout the city. Alternatively, taxis in Greensboro can be flagged down on the street. There are many taxis awaiting each arrival at the Piedmont-Triad International Airport, and at the Amtrak and Greyhound terminals.