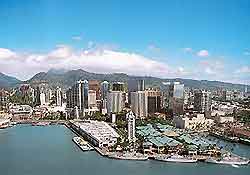 Honolulu comes with enough exciting manmade and natural landmarks to keep you busy for days.

You will find many historic buildings, monuments, memorials and towers in Honolulu, such as the lofty Aloha Tower, striking contemporary structures including the State Capitol Buildings, and monumental cliff formations like the imposing Diamond Head crater. 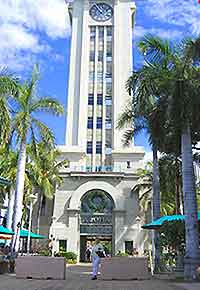 Address: Aloha Tower Drive, Honolulu, Hawaii HI, 96813, USA
The 56-meter / 184-foot tower sports a couple of clock faces and a dome, and was once the tallest building in Hawaii. The tower is situated in the center of the Aloha Tower Marketplace shopping center and is hard to miss as the greeting, 'Aloha', is stamped on its sides. The Marketplace beneath the Aloha Tower has a wide selection of shops and eateries.
Open hours: 09:00 to sunset
Admission: free

Address: Honolulu Harbour, Honolulu, Hawaii HI, 96813, USA
Built in 1878 in Glasgow, Scotland, the Falls of Clyde is a fully rigged, four-mast ship that is the only one of its kind left in the world. The boat was used to carry sugar, tea and oil during its working life and also carried passengers between Hilo and San Francisco. As of late 2008 the Friends of Falls of Clyde (FoFOC) took over ownership of the ship from the Bishop Museum , inorder to restore it. Today, the Falls of Clyde remains moored in Honolulu Harbor.
Open hours: daily
Admission: no public access 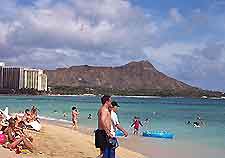 Address: Diamond Head Road, Honolulu, Hawaii HI, 96815, USA
Created from a volcanic eruption about 100,000 years ago, Diamond Head was once used as a defense fort by US forces and offers fantastic ocean views. The summit can be reached via a spiral staircase and tunnel.
Open hours: 06:00 to 18:00
Admission: charge 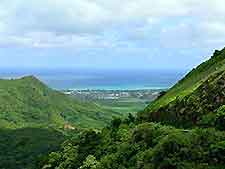 Address: 2177 Puowaina Drive, Honolulu, Hawaii HI, 96813, USA
Located behind Honolulu Harbor, the extinct volcanic Punchbowl Crater was once a sacrificial ground and also the site of many secret royal burials. The National Memorial Cemetery of the Pacific is the final resting site of thousands of service men and women.
Open hours: daily - 08:00 to 18:30
Admission: free 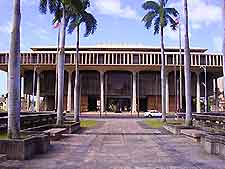 Address: 415 South Beretania Street, Honolulu, Hawaii HI, 96813, USA
Tel: +1 808 586 0178
The Capitol building is a grand and unusual building with volcano-like legislative chambers and surrounding water that represents the Pacific Ocean. This fairly new structure replaced the beautiful Iolani Palace as the seat of state government in 1969 and is well worth a visit.
Open hours: Self-guided tours: Monday to Friday - 09:00 to 15:30; Guided tours: Tuesday to Friday - 13:00
Admission: charge