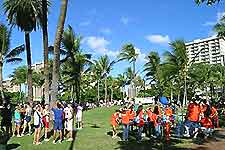 There is always some sort of festival or event taking place in Honolulu and it seems that not a day goes by without something interesting happening on Honolulu streets, in the parks and on the Waikiki beaches. New Years Eve and Chinese New Year are special occasions in Honolulu, where street parties, festivals and parades are a colorful and exciting occasion for all involved, while hula competitions and a number of swimming, surfing and sailing events are also very popular.