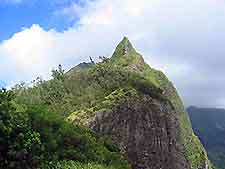 Formed by two massive shield volcanoes sheltering a central plain, Hawaii's Oahu Island is known to all and sundry as being the home of Honolulu, with this state capital set on its southeastern coastline.

The oral history of Honolulu, along with excavated artifacts, confirms an original settlement in the exact area by the 11th century. Later the court of King Kamehameha I moved to the site in 1804 after the royal warrior united the archipelago's diverse groups. Undecided as to the best location for his city, the king moved again in 1809 to the now downtown district, before relocating to Kailua-Kona on the Big Island in 1812.

The first European visitor to the safe harbor at Honolulu was Captain William Brown, an English mariner, who arrived in the early 1790s. Subsequently, the port became a focal destination for merchant vessels traversing the sea lanes between Asia and North America. By 1845, King Kamehameha III had moved the kingdom's capital from Lahaina to Honolulu and began its modernization, with the rulers that followed transforming the city into a hub for commerce. Great civic and religious buildings sprouted, including both the Iolani Palace and St. Andrew's Cathedral. Concurrently, the descendants of American missionaries began to start a series of businesses within the downtown district.

By the early 19th century, the history of Honolulu had changed course. Brothels and taverns were set up in the port area to service the crews of the whaling ships, which regularly docked in the protected harbor. Yet Christian missionaries, firmly established in the area by the mid-1800s, forced the Hawaiian king to prosecute drunken sailors and bear down on prostitution.

The whaling ships retaliated by moving their Hawaiian base to Lahaina on Maui Island, where drink and women were more easily available. The descendants of the original missionaries were to become enormously powerful in the islands, owning and controlling most of the highly profitable cane sugar plantations and bringing in many thousands of Asian laborers to work the land. 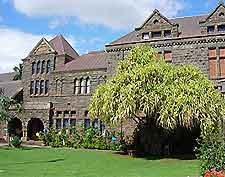 Adjustment to the modern world of the late 19th and early 20th centuries brought turbulence and cultural changes to the city, with the Hawaiian monarchy overthrown in 1893 and the annexation of the archipelago by America in 1898. A huge fire destroyed much of the city in 1900 and Honolulu's port area became home to an American naval base, due to its strategic Pacific Ocean location.

At dawn on December 7th 1941, Hawaiian Americans in Honolulu got a rude awakening about the perils of war. The Japanese Imperial Army made a surprise attack on the US Pacific Fleet in Pearl Harbor, to prevent them from challenging the Japanese domination of the Pacific and Southeast Asia during WWII. Seven ships and 188 aircraft were destroyed, and over 2,000 service men perished, as the United States was forced to enter the war. It prompted President Franklin D. Roosevelt to describe it as 'a date which will live in infamy'. The island was subsequently placed under martial law until 1945 and battles raged in Asian waters, as well as in the European and North African theaters of war.

A new period in Honolulu history followed in 1959, with Hawaii gaining full US statehood, an event that stimulated the economy in the commerce and tourism sectors and resulted in rapid economic growth.

Today, with easy access by air to Honolulu, more than 60 percent of all the millions of annual visitors arrive at the city's international air hub each year, many of which stay in the Waikiki district to enjoy its superb beaches, water sports, nightlife and sunny lifestyle.