Known as the 'Island of the Swallows' (Ah-Cuzamil-Peten) or 'Isla Cozumel' and just over 70 km / 43 miles to the south of Cancun, Cozumel stands directly opposite the beautiful Playa Del Carmen. Located on the far eastern side of the Mexican Yucatán Peninsula, Cozumel is part of the Quintana Roo state.

The island of Cozumel measure just under 50 km / 31 miles by 16 km / 10 miles and has an overall population of more than 75,000 people. San Miguel de Cozumel is the island's biggest town by far, being centred around the Riviera Maya district and known for its International Pier and regular ferry services. This is the best place to pick up a map of Cozumel and its many coastal resorts.

The town of San Miguel de Cozumel is easy to find your way around on foot and is the only town of the whole island. Within San Miguel, the scenic waterfront boulevard of the Avenida Rafael Melgar is a notable thoroughfare, while the main plaza can be found next to the actual ferry dock. Just over 2 km / 1.5 miles to the north of the town is Cozumel International Airport, next to the Caribbean Coast.

Many of the main beach resorts line the eastern side of Cozumel and include the Playa Bonita, the Playa de San Martin and the Playa El Mirador. This is a particularly lively part of Cozumel, although in most locations, the strong riptides can make swimming hazardous. On the north-easterly side of the island, Punta Molas can only be reached by 4WD vehicles and is known for its lighthouse, which is sited at the very tip of this small peninsula. 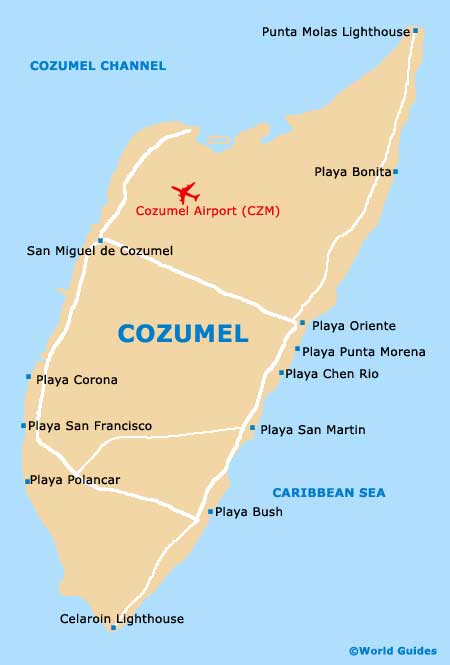