Salou is a small regional hub based to the south-west of Barcelona, where it serves as capital of a coastal stretch called the Costa Daurada. This has been a popular tourism resort for a few decades now, with plenty of fine golden-sand beaches backed by traditional Catalonian villages.

In the 13th century, King James I launched a campaign to retake Mallorca from Salou, and his success is still celebrated in modern festivals. There are three tourist information offices in Salou (on the Paseo Jaume, the Plaza de Europa and the Plaza Venus), each with maps and English-language brochures detailing local activities.

Most tourists holidaying in this part of Catalonia come here to sunbathe on the beaches of Salou, which serve as the principal tourism magnet and include the Capellans, Llenguadets, Llevant and Ponent beaches. Often close to plenty of gift shops and eateries, and offering a variety of water sports such as jet skiing and windsurfing, these sunny Mediterranean beaches can get busy during the summer months. Away from the sand, holiday makers also like to pay a visit to the nearby Aquopolis Water Park and its fun water slides, as well as the Port Aventura theme park, where roller coasters and fast funfair-type rides await. Another enjoyable family attraction in Salou is the House of Illusion, where you can expect magic, illusions and evening entertainment as you dine out. More information about Salou Tourist Attractions.

Being steeped in history and boasting a heritage dating as far back as the 13th century, Salou is full of old sights and landmarks, as well as containing a number of more modern introductions. Some of the town's most attractive buildings originate from the 19th century and include both the Harbour Master Building and the Carrilet Railway Station, while a little older and built just after the mid-18th century is the Santa Maria del Mar Church. Part-way down the Jaume I Promenade (Passeig de Jaume I 'el Conqueridor') and next to the waterfront is the King James Statue. A little more recent is the Illuminated Fountain (Font Iluminosa), which puts on a dramatic light and sound show each day after the sun has set. Photo opportunities of the coastline around Salou don't come much better than those afforded by the Penya Tallada, a splendid natural rocky cove separated from the mainland. More information about Salou Landmarks and Monuments.

The past of Salou is celebrated at a selection of the town's most historic homes, and these function rather like museums, with their well-displayed exhibits, themed information about the past, and period character. One to look out for is the ancient Old Tower, which is almost 500 years old and is currently home to the Contemporary Enamel Art Museum. The Bonet House (Xalet Voramar) is worth seeing for its Art Nouveau architecture alone and features a series of impressive murals within its rooms. Built as recently as the early 1970s, the Catalan Farmhouse has a very authentic rustic character, since its construction used reclaimed building materials. Various historic farm tools are displayed here, once being used by the farmers of Catalonia. The summer artisan market is another good reason to visit the Catalan Farmhouse. More information about Salou Museums.

If you like to get out and about during your holiday, then Salou is conveniently near to a number of outlying tourist attractions, and is also close to some very notable Spanish towns and cities. The city of Barcelona, Catalonia's exciting capital, is within comfortable driving distance, being less than one and a half hours away by road and coming with some world-class sights, such as its medieval cathedral masterpiece created by Gaudi - La Sagrada Familia. Much closer to home are the coastal towns of Cambrils and Tarragona, the latter of which is where you will find the World Heritage Site of Tarraco and its magnificent Roman ruins. To the north, the town of Reus is more like a friendly suburb and contains the regional airport (Reus Airport), as well as some very attractive Gaudi-inspired buildings. If you are prepared for a drive and an early start, then you may even like to consider an excursion to Valencia, which is easily under three hours away and to the south-west. More information about Salou Attractions Nearby. 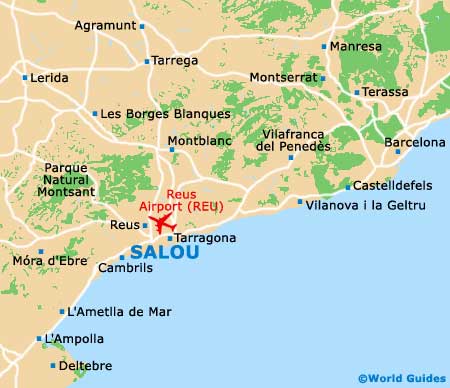