Corfu history is shorter than that of many other Greek islands, although it is certainly no less impressive. Over the centuries the island has played host to all major powers, including the Romans, the Venetians and even the British, and has only actually been under Greek rule for a relatively short amount of time. The island has quite a different look and feel to much of the rest of Greece, and a notable lack of archaeological sites.

The history of Corfu (named Kerkyra in Greek) goes back to the 8th century BC, when it was called Corcyra. Due to its positioning near the mouth of the Adriatic, Corfu Town became a naval base and trade centre under the Corinthians. It eventually split from Corinth and entered into a century long conflict, before being conquered by Macedonia and placed under its wing. Relics from these early days can be found at the Archaeological Museum.

Various other powers claimed Corfu not long after, including the Romans in the year of 229 BC. They built their bathhouses, villas and roads, and were here for some 500 years (right up until 337 AD), using the port to conduct campaigns into the Eastern Mediterranean. The Byzantine Empire took over when the Roman Empire was in its decline and that tenure lasted into the 13th century AD.


The Byzantines had to fortify the town from pirate attacks, with many towers remaining today. The Old Fortress was started in the 8th century AD and was bolstered by both the Venetians and the British during their respective reigns. The fort today is Corfu's main ancient attraction, while not far away is the New Fortress, or 'Neo Frourio'.

The Normans ruled the island prior to its takeover by the Venetians. A period of unrest pitted the French King of Sicily against the Venetians, although Venice controlled Corfu fully in history right up until the late 18th century. At this time, numerous olive trees were planted in the fertile soil and these still dot the island today. The Venetians also erected many fine, classical-style buildings.

One of these is the Church of Agios Spyridon in historic Corfu Town, which dates from the late 1580s and frequently functions as a popular meeting place for tourists. The Old Town has a very Venetian air in general and is a pleasant spot to stroll around, with winding pedestrianised alleys and a seafront esplanade.

Jostles ensued after Napoleon came here in 1797, when much of Greece was under the Turks. The French were driven off by the Russians, the Turks and the British in 1800, with the latter occupying Corfu in 1815 and developing roads, supplies and education. Construction of the very English-style Palace of St. Michael and St. Georges commenced in 1819, followed by the Royal Gardens. The Ionian Islands joined Greece in 1864, almost 30 years after gaining independence from Turkey and Britain.

Back under the Greeks, fine buildings were erected in Corfu, including the Achillion Palace, which later featured the Kaiser's Bridge under Wilhelm II.

Corfu history includes both World Wars, with its capital town sustaining heavy damage in WWII, including the loss of its library, theatre, and Ionian Academy. The town was subsequently rebuilt and the island was quick to get back on its feet, enticing tourists and becoming a hot destination. The resorts nearest Corfu Town are amongst the island's busiest, being well-placed for visits to the historic capital. 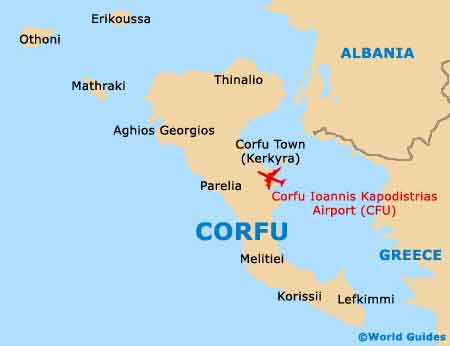