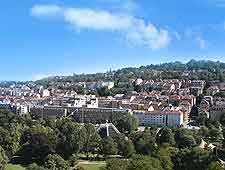 The German city of Stuttgart's tourism slogan is 'Stuttgart is More', an apt description of this great city which combines culture, events, museums and a fascinating history with state-of-the-art tourism facilities.

Stuttgart is a mega-city surrounded by satellite towns, but beyond its massive conurbation are vast swathes of forested land. The city itself holds some of the greenest suburban and urban locations in the whole of Europe, including the lovely Neckar Valley. Tourism in the entire area forms a useful adjunct to its industrial and financially-based economy, and is supported by its many historic buildings, lakes, pleasure parks, events and places of interest.

Tourist information about the city itself and Baden-Wuttemberg, the German state of which Stuttgart is the capital, is readily available from the official i-Punkt Tourism Office on the Konigstrasse, or the travel agencies on the Theodor-Heuss-Strasse and the Tubinger Strasse. 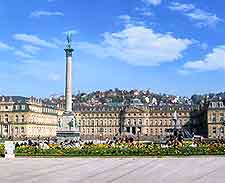 Boasting such a long history, Stuttgart comes with many heritage attractions and old buildings. Tourists will enjoy strolling around the Bohnenviertel and its cobblestone alleyways, where a pleasant mix of old and new awaits. Located in the very centre of Stuttgart is the Old Castle (Altes Schloss), which dates back to the 10th century and remains in an excellent state of repair, after extensive restoration work. Built in the early part of the 19th century, the New Castle (Neues Schloss) adds further character to the city. Families on holiday usually find themselves paying a visit to the Wilhelma Zoological and Botanical Gardens, the Palace Garden (Schlossgarten) or the Carl Zeiss Planetarium. More information about Stuttgart Tourist Attractions. 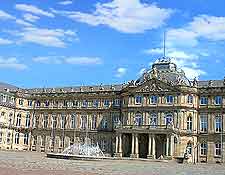 As well as the plentiful tourist attractions in the city, Stuttgart is also home to a series of impactful landmarks, such as its Television Tower (Fernsehturm), which has its very own observation deck and views as far as the Swiss Alps. Sightseers should also keep an eye out for the 16th-century Shackles Tower and the more modern Tagblatt Tower (Tagblatt-Turm). Those with some spare time may like to consider visiting the hilltop Burial Chapel Wurttemberg, or the Italianate garden named the City Lapidarium. Adding a touch of Art Deco glamour is the train station (Stuttgart Hauptbahnhof), although the future of this particular landmark is today somewhat uncertain. More information about Stuttgart Landmarks and Monuments. 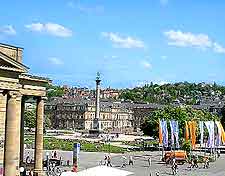 The museums of Stuttgart add further interest for tourists, particularly those wishing to learn about the city's history and thriving manufacturers of German automobiles. Head to the Mercedes-Benz Museum for information about this iconic brand, to the Porsche Museum for some classical sports cars, or to the Gottlieb Daimler Memorial Site, to find out where the famous Daimler cars first came into being. The oldest in Stuttgart is the Wurttemberg State Museum, which opened more than 150 years ago and is packed with local artefacts. Both the Kunstmuseum (Art Museum) and the Staatsgalerie (State Gallery) are also more than worthy of a mention, showcasing a wealth of German art works. More information about Stuttgart Museums and Stuttgart Art Galleries. 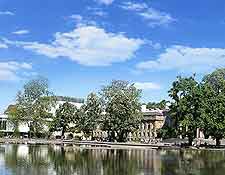 If you wish to head outside of Stuttgart for a day or longer, then various day trips are possible, both in and around Baden-Wurttemberg.

Most tourists find it hard to resist the magnetism of nearby Heidelberg, an appealing city with a characterful Old Town and a truly awe-inspiring castle (Heidelberger Schloss), which is considered one of the most important and impressive in Germany. 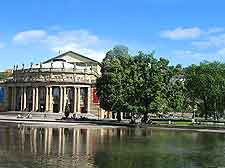 Still within the state is the neighbouring city of Ludwigsburg, which lies just 15 minutes to the north and exhibits a glorious early 18th-century baroque palace (the Residenzschloss). Across the German / France border is the city of Strasbourg and its undeniable cultural vibe, while back in Baden-Wurttemberg, you make like to plan an excursion to Baden-Baden, (via the Black Forest), to the Schwabisch Hall, or to the beautiful university town of Tubingen, where a walk around the Old Town (Altstadt) is like stepping back in time. More information about Stuttgart Attractions Nearby. 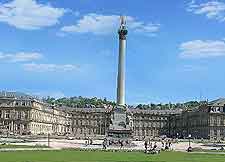 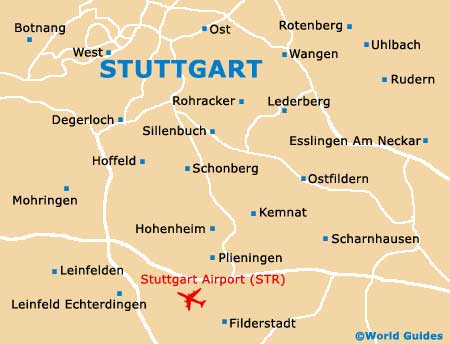