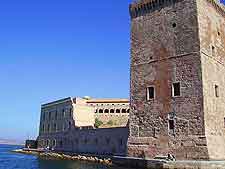 Marseille's rich legacy as a Mediterranean maritime city means that there is no shortage of interesting monuments and landmarks. These include Roman ruins, an ancient harbour complete with twin fortresses, and a number of tiny islands, all of which have played their own role in Marseille's history.

Other well-known landmarks include the revolutionary residential block designed by the modern architect, Le Corbusier. Address: Centre Bourse, Square Belsunce, 13001 Marseille, France, FR
Tel: +33 (0)491 90 4222
Situated just behind the Centre Bourse are reminders of Marseille's rich archaeological heritage. The ruins, which were unearthed during the building of the shopping mall in the 1960s, include remnants of an ancient Greek port, as well as sections of Marseille's old city walls and monuments.
Open hours: Monday to Saturday - 10:30 to 17:30
Admission: free Address: 3 Rue de l'Abbaye, 13007 Marseille, France, FR
Tel: +33 (0)496 11 2260
The Abbaye St. Victor is Marseille's oldest church. Founded as a 5th-century monastery, this historic structure was built on the site of a Christian martyr's tomb. Frequently added to over the centuries, the church is an impressive monument, as much for its fortress-like appearance as for its role as a traditional church. The extensive crypt and catacombs at the Abbaye St-Victor are open to the public, where visitors can also view a number of sarcophagi.
Open hours: daily - 09:00 to 19:00
Admission: free (charge for crypt visit)

Address: 7 Quai des Belges, 13001 Marseille, France, FR
Just a short distance from the Château d'If and central Marseille are the islands of Ratonneau and Pomègues. Since the 19th century, these islands have been used to quarantine potential cholera sufferers as well as house German troops during World War Two. Ruined fortifications and hospital buildings remain as monuments to its turbulent past. Today, the Iles de Frioul have been allowed to return to their wild state and are popular with nature lovers who come to observe its wild birds and plant life. Boats take visitors directly to the Iles de Frioul or via the Château d'If.
Open hours: Tuesday to Sunday, winter - 09:30 to 17:30; daily, summer - 09:30 to 18:30
Admission: charge Address: 280 Boulevard Michelet, 13008 Marseille, France, FR
This 17-storey apartment block is widely recognized as the first of its kind, both in terms of the building materials used and the fact that it provides everything a resident could ever need, including shops, cafes and restaurants. Designed by the architect, Le Corbusier, and completed in 1952, this famous Marseille landmark has become a monument to modern architecture, still impressing visitors today with its innovative use of glass and concrete.
Open hours: daily
Admission: free

Address: Quai du Port, 13002 Marseille, France, FR
The oldest of two fortresses which dominate the harbour of the Vieux Port, Fort St. Jean was built during the Middle Ages to protect Marseille's independence. The Roy René Tower is open to the public during exhibitions.
Open hours: Tours by prior arrangement, details from Marseille Tourist Office
Admission: charge Address: 2 Boulevard Charles-Livon, 13007 Marseille, France, FR
Fort St. Nicholas was built during the 17th century, when Marseille's independence was finally lost and Louis XIV, the 'Sun King' needed to keep an eye on his rebellious citizens. Today, this grand building is home to the Foreign Legion.
Open hours: Organised tours by prior arrangement with Marseille Tourist Office
Admission: charge