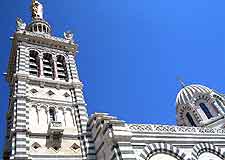 Marseille's blend of lively cosmopolitanism and wide variety of historical and cultural attractions makes it an appealing tourist destination. Much of Marseille has benefited from renovation in recent years, making it an ideal place both to sightsee and soak up the atmosphere, or alternatively, why not simply sunbathe on one of the city's magnificent sandy beaches?

Having grown up around its port, many of Marseille's tourist attractions can be found around the Vieux Port. These include a fine selection of beautifully restored civic and religious buildings, and a 16th-century castle. 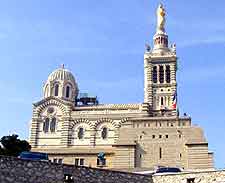 Address: Colline de la Garde, 13006 Marseille, France, FR
Tel: +33 (0)491 13 4080
The most distinctive of Marseille's sights and one that should not be missed is the Romano-Byzantine cathedral of Notre Dame de La Garde. This imposing 19th-century building sits on Marseille's highest point, just south of the Vieux Port. Most stunning of all is the 9-metre / 30-foot high golden Virgin perched on top of the basilica's bell tower. The bell itself is impressive, measuring 2.5 metres / 8 feet in height and weighing in at 8,324 kg. Inside, the domed basilica is intricately decorated with coloured marble and murals. The crypt is also open to visitors.
Open hours: summer - 07:00 to 20:00; mid-June to mid-August - 07:00 to 22:00; winter - 07:00 to 19:00
Admission: free 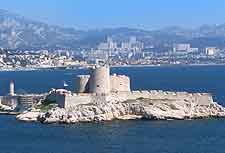 Address: 1 Quai des Belges, 13001 Marseille, France, FR
One of Marseille's most popular tourist attractions, the Château d'If is perhaps best known for its starring role in Alexandre Dumas' book, 'The Count of Monte Cristo'. Perched on the tiny island of If, the most famous resident of this 16th-century castle-turned-prison is Mirabeau, the hero of the French Revolution. The castle's cells are always popular with visitors, while the island itself also offers fantastic views of Marseille. The island can be reached by a short boat trip from the quai des Belges in the Vieux Port (regularly, 09:00 to 17:00, last return at 18:30; approximately 15 to 20 minute journey; charge).
Open hours: daily, September to March - 09:30 to 18:00; June to August - 09:30 to 18:30
Admission: charge, discount for students Address: 2 Rue de la Charité, 13002 Marseille, France, FR
Tel: +33 (0)491 14 5880
Located in the Panier district, this fine 17th-century building originally started out life as a workhouse and hospice. Nowadays, the building is used as a cultural and exhibition centre, and also houses Marseille's Archaeological Museum and the Musée des Arts Africains, Océaniens and Amérindiens, amongst other attractions. Particularly attractive is the main courtyard and its Italian baroque-style domed chapel.
Open hours: Tuesday to Sunday, summer - 11:00 to 18:00; winter -10:00 to 17:00
Admission: charge Address: La Joliette, 13002 Marseille, France, FR
This splendid cathedral was built under the orders of Napoleon III in the 19th century and cost an astonishing 14 million gold francs. Designed in the Romano-Byzantine style, it took over 20 years to raise the funds to finish the interior, which can hold a 3,000-strong congregation. The Cathedrale de la Nouvelle Majo features numerous ornate sculptures and mosaics, as well as some rather magnificent sea views.
Open hours: Tuesday to Sunday - 09:00 to 12:00 and 14:30 to 17:30
Admission: free

Address: 58 Boulevard Charles-Livon, 13007 Marseille, France, FR
Tel: +33 (0)491 55 1575
One of Marseille's more impressive attractions, the Palais du Pharo was built in the 19th-century as Napoleon III's waterfront residence. It looks out to sea and the infamous Château d'If. Public exhibitions are sometimes held here and are a good opportunity for visitors to view the palace's splendid interior. The palace is also used as a conference and reception venue throughout the year.
Open hours: daily - hours vary
Admission: charge