Marseille is a truly cosmopolitan city, with plenty of character and a lively urban atmosphere. The city is divided into 16 municipal arrondissements, fanning out from Marseille's old and new ports. Most locations of historical and cultural interest today can be found in the Vieux Port and Le Panier districts of Marseille, in the 1st and 2nd arrondissements. These areas also offer a good selection of cafés and restaurants. Central Marseille's main shopping district is located in and around La Canabière.

Also worth visiting are the city's main beaches and the coastal area, just a short distance south of the centre. Here are Marseille's main districts, neighborhoods and quarters.

Marseille's old port is still very much in use today. During the daytime, fishermen sell fresh fish straight off their boats, or from stalls set up on the quayside. The many pleasure boats and yachts that use the harbour help to keep this area lively during the day. Ferries also take day trippers over to the Château d'If and the Iles de Raoul. At nighttime, this district of Marseille is just as busy, thanks to the numerous seafood restaurants around the port and pedestrianized cours d'Estienne d'Orves, and nearby place Thiers. 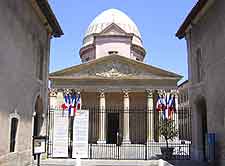 The northern side of the Vieux Port is known as Le Panier and is a popular place to while away a sunny afternoon. Originally, a typical old French town, this area of Marseille was almost completely destroyed during World War Two. During its rebuilding, archaeologists discovered the remains and contents of a Roman dockside warehouse. These are now housed on site in the Musée des Docks Romains. Highlights in this part of Marseille include a number of fine 17th-century buildings, which survived destruction in 1943. These include the Centre de la Vieille Charité, the Hôtel de Ville and the Hôtel de Cabre, as well as a good selection of museums. 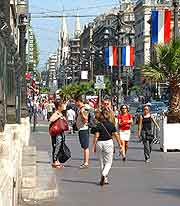 La Canebiére is the main boulevard which forms the commercial heart of Marseille. Once a rather grand thoroughfare, it remains as vibrant as ever. This district of Marseille is still the place where people come to buy and sell pretty much everything and its many street traders help to retain its lively, multicultural atmosphere. A more traditional shopping centre, including supermarkets, can be found just west of La Canebiére, at Centre Bourse.

The streets south of La Canabière, including Rue Paradis and Rue St-Ferréol, are becoming ever more trendy in Marseille and it is definitely worth stopping to browse around the shops there if you're looking for something special to take home. As well as boutiques, this area is also where most of Marseille's bohemian cafes, fashionable restaurants and theatres can be found. These are mainly centred on the Cours Julien, which on Wednesday morning transforms itself into the city's open air market. 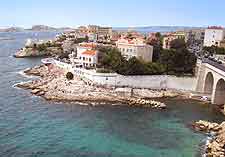 A coastal area extending from the centrally located Plage des Catalans, the Corniche is near to the Palais du Pharo and ends at Marseille's main sandy beach, the Plage du Prado.

The Corniche features a number of tiny, isolated beaches which can be accessed from the coastal path. This district is also home to the city's largest green space, the Parc Borèly.