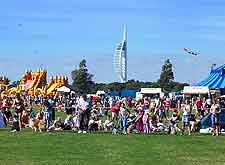 There are some truly spectacular events to be enjoyed at Portsmouth, with festivals, fireworks, open-air concerts, choir recitals, art exhibitions, Charles Dickens birthday celebrations and various anniversaries, to name but a few. 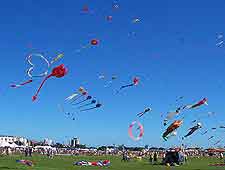 During Easter and the summer holidays, attractions in Portsmouth go all out to draw the crowds, offering lots of different seasonal activities for all ages.

The Blue Reef Aquarium in Portsmouth has become known for its calendar of festivals and family friendly events. These include the Blue Reef's National Science and Engineering Week each March, and in August, a Teddy Bears Beach Party, a Pirate Treasure Hunt, a Sandcastle Building Contest and a Finding Nemo Week.

In mid-July, the Portchester Castle plays host to the Last Night of the Portchester Proms, while towards the end of August, the well-supported Portsmouth International Kite Festival takes place on Southsea Common and seems to get bigger and better year on year.

September is another busy month when it comes to events, with the Portsmouth Multicultural Festival at the Southsea Castle Field being a firm highlight, along with the Heritage Open Days, when countless grand private residences open their doors to the public.

Later on in the year, the Great South Run Weekend is held each October, with the Victorian Festival of Christmas being staged in early December, at the Portsmouth Historic Dockyard. This Yuletide event has been held every year since 1999 and features a traditional Victorian street covered in snow, together with carol singing and old-fashioned fairground festivities.