Zadar is one of Croatia's favourite Dalmatian destinations and is a popular city steadily gaining a solid reputation for tourism. The city lies above Split and Dubrovnik, roughly three hours from Zagreb, and can be accessed by flying (served by budget airline Ryanair) or by rail. An ancient city with some nice beaches nearby, Zadar also comes with a set of Roman ruins in its ancient core and literally dozens of pretty churches.

In addition, there are fine islands and national parks within easy reach, and the shopping, pavement cafes and nightlife options are also particularly good. The daily market in Zadar is not to be missed and ranks amongst Croatia's very best, with its mountains of fresh produce and seasonal delicacies. There are several tourist information centres in Zadar, including one in the Old Town, which resides on the Mihe Klaica, close to the Town Watchtower, the Loggia, the Narodni and the National Theatre.

Part shingle, part paving, Kolovare Beach can be reached on foot and this part of the city soon fills up in the summer months, when families on holiday come to stroll along the promenade and have a paddle in the Adriatic Sea. However, the best beaches are a short drive or bus trip away and include those of Borik, Diklo, Nin, Petrcane, Privlaka and Zaton. At no more than 20 minutes away and to the north-west, Zaton Beach is located in the suburb of Nin and is suitable for all ages, with its enormous beachfront campsite providing an appealing alternative to mainstream city hotels. Again to the north-west and linked to the city centre by the Puntamika bus, Borik Beach also features its own smaller camping ground, being filled with pine trees and situated slightly closer to the city's attractions. More information about Zadar Beaches.

The Old Town Peninsula is where much of the sightseeing interest is based and this part of Zadar is rich-pickings for tourists on holiday here. A walk around the medieval City Walls and Gates is a good thing to do when you first arrive and provides an idea of the city's former fortifications during the days when it was ruled by the Venetians. Only chunks of the walls remain and some former sections have been transformed into public parks and plazas. Also in the Old Town are the Roman Forum ruins, which date back almost 2,000 years and once included a series of grand temples.

If you enjoy walking, then a stroll along Zadar's trendy seafront Riva promenade (Petra Kresimira IV) is another good way to pass the time. It is here where you can experience the unique Sea Organ (Morske Orgulje), with its haunting noises being powered by the sea waves. Close by, the Sun Salutation (Pozdrav Suncu) also harnesses natural energy and comes alive in the evening, when this giant paved circle begins its free light show, lasting all through the night. Tourists who prefer to hang out with the locals and see city life first-hand should head to either the Five Wells Square (Trg Pet Bunara) or the People's Square (Narodni Trg), where you can enjoy a spot of al fresco dining whilst indulging in some Croatian people watching. More information about Zadar Tourist Attractions.

Zadar is especially noted for its high concentration of churches, with the oldest hailing from the 9th century. These form the most historic and notable landmarks still standing in the city today, with the most impressive including St. Chrysogonus Church (Crkva Svetog Krsevana), the Church of St. Simeon (Crkva Svetog Sime) and the Church of St. Mary (Crkva Svete Marije). Presiding over the Trg Svete Stosije plaza, St. Anastasia Cathedral (Katedrala Svete Stosije) has become an iconic sight in the city, with its majestic Romanesque appearance being shaped between the 12th and 13th centuries, although it wasn't until the latter part of the 19th century when its tall bell tower made an appearance. Interestingly, St. Anastasia Cathedral has been visited twice by popes during its long life, with the first time being in 1177, and then far more recently, in 2003.

Standing on the north-easterly side of the Roman Forum, the ancient Church of St. Donat (Crkva Svetog Donata) exhibits a Byzantine-style facade and simple circular architecture, crowned with a short tower complete with red-tiled conical roof. For some real traditional Gothic character, the Franciscan Monastery and Church (Samostan Svetog Frane) will more than oblige. More information about Zadar Landmarks and Monuments.

As the principal city in Northern Dalmatia, Zadar has much to offer tourists in the way of culture, historic information and museums. The National Museum (Narodni Muzej) is one of the best attractions falling within this category and forms part of the St. Krzevan's Church monastery. At the city's Archaeological Museum (Arheoloski Muzej), visitors can expect to discover a wealth of Neolithic relics excavated from throughout the region, such as old weaponry, ceramics and jewellery. Filled with an assortment of paintings, including pieces created by regional Croatian artists, the Zadar Art Gallery (Umjetnicka Galerij) adds a further dimension to the city's cultural offerings, as does the Museum of Church Art (Muzej Crkvene Umjetnosti) and its religious masterpieces. More information about Zadar Museums and Zadar Art Galleries.

Both the Zadar and Sibenik regions combine to make up the part of Croatia known as Northern Dalmatia, and this area is perfect for day trips for the more discerning holidaymaker. Tourists with a hire car will find no good reason not to head outside of Zadar and pay a visit to some of the surrounding neighbouring towns, such as Nin and Starigrad (Stari Grad), the latter of which is amongst Europe's oldest towns and has its origins in the 4th century BC. However, its is the region's exceptional national parks where most day trippers choose to head, taking in the breathtaking cascading waterfalls at the Plitvice Lakes National Park, the mountain peaks at the Paklenica National Park, and the endless scenic trails through the Krka National Park.

Island hopping may also appear on your agenda, with excursions to Dugi Otok, the Kornati Islands and Ugljan Island all coming highly recommended, amongst others. More information about Zadar Attractions Nearby. 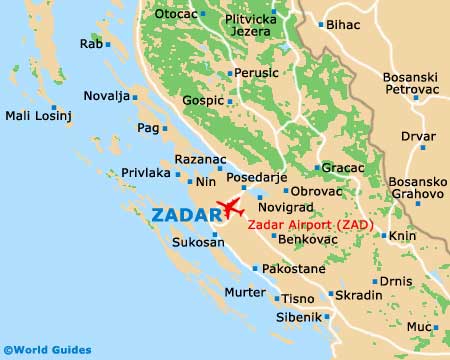