The Croatian walled city of Dubrovnik sits on a peninsula jutting out into the Adriatic Sea, in the far south of the country. One of the busiest and most popular tourist destinations on the Adriatic coast, Dubrovnik has a thriving port and is now a prestigious UNESCO World Heritage Site. Historically a major maritime trading centre, in the Middle Ages this stunning city became the only Adriatic city-state to rival the might of Venice. Its great periods were during the 15th and 16th centuries, and much of the magnificence of those eras remains today.

Known as the 'Pearl of the Adriatic', this fascinating city is a Mecca for tourists, with its spectacular Old Town crammed with heritage architecture, forts, museums and palaces, their glorious interiors a monument to the wealth of the city. Protected still by its ancient city walls, Old Dubrovnik is a dream destination for history buffs.

Both Catholic and Serbian Orthodox cathedrals and churches tower over the terracotta roofs of the old buildings and, when sightseeing gets tiring, Dubrovnik's pebble beaches and warm seas give a relaxing change of focus. Of note, tourist information is available at the city's numerous tourism outlets, with some of the most popular being located at Gruz Harbour, along the Old Town's Ulica Svetog Dominika, and on the Setaliste Kralja Zvonimira, within the Lapad promontory.

Many appealing family beaches skirt the peninsula, with the most popular being fronted by resort-style hotels and tropical palm trees. The coastline around Dubrovnik comprises a diverse mixture of Adriatic beaches, some sandy, others made up of pebbles and small rocks. Situated on the eastern side of the Old Harbour, Banje Beach is conveniently close to the action and features great views across the Old Town. Connected by a coastal pathway, the Lapad beaches are especially attractive, with their fine sand and seafood restaurants, while at the Sveti Jakov Beach you can try your hand at jet skiing and other fun water sports. More information about Dubrovnik Beaches.

Considering its size, the sightseeing opportunities in Dubrovnik are huge. When you first arrive in the city, a walking tour of the Old Town comes highly recommended, being led by experienced guides and departing each day from the Latino Club Fuego. If you prefer to explore more at your leisure, then the Pile Gate is a good place to start, with many places of interest leading off the Placa (Stradun) thoroughfare and often being of a religious nature. Some of the grandest include the Dubrovnik Cathedral (Katedrala Velike Gospe), St. Blaise's Church (Cvkva Svetog Vlahe), St. Ignatius Church and Jesuit College (Crkva Svetog Ignacija i Isusovacki Koledz) and St. Saviour Church (Crkva Svetog Spasa). The Jewish Synagogue (Sinagoga) is another noteworthy sight since it is one of Europe's most historic still in use. At the Sponza Palace (Palaca Sponza) you will find an imposing Gothic and Renaissance-style facade, along with an important collection of manuscripts within the State Archives, with the oldest dating back almost 1,000 years. More information about Dubrovnik Tourist Attractions.

Over the years, the city of Dubrovnik has led an interesting and often chequered life, being a major trade centre in the 12th century and a port city in the 15th century, enjoying much prosperity at these times. However, disaster struck in 1667, when a devastating earthquake virtually destroyed the city, with just the Rector's Palace and the Sponza Palace managing to stay standing. The city was subsequently rebuilt, although in a more uniform style and with much baroque architecture, and its trading powers quickly disappeared. At the beginning of the 1990s, Dubrovnik hit the news headlines when it was caught up in the Yugoslavian war and many fine buildings were bombed. Today, all of these landmarks have been fully restored to their former glory.

The fortified city walls enclosing the Old Town add a huge amount of medieval character, being of grand proportions and originating from the 13th century, although earlier walls were built in the 9th century to protect against barbarian invasions. As you walk around the walls you will encounter the fortresses of Bokar, Lovrijenac, Revelin and St. John, whilst enjoying the city and seafront vistas. Other significant landmarks worth spotting in Dubrovnik include the City Bell Tower, the Onofrio Fountains, the Orlando Column and the St. Lawrence Fortress (Fort Lovrijenac), which dominates the western seafront and during the 11th century prevented the Venetians from gaining power of the city. More information about Dubrovnik Landmarks and Monuments.

Those on holiday in Dubrovnik and looking for information about its long and eventful history should head to the city's museums. The Ethnographic Museum (Etnografski Muzej), the Franciscan Monastery Museum (Muzej Franjevackog Samostana) and the Maritime Museum (Pomorski Muzej) are three of the best, with the latter celebrating the city's maritime heritage and located within St. John's Fortress. At the Dubrovnik Art Gallery (Umjetnicka Galerija) are many examples of fine Croatian art works, accompanied by regular temporary exhibitions. The Museum of Modern Art (Muzej Suvremene Umjetnosti) is another good gallery option for culture buffs, with its plentiful contemporary masterpieces. More information about Dubrovnik Museums and Dubrovnik Art Galleries.

The constant popularity of Dubrovnik as a holiday destination has rippled outwards to the surrounding region, although thankfully mass tourism has yet to arrive around the area now known as the Dubrovnik Riviera. This Adriatic stretch is lined with attractions and day trip possibilities, with nearby Zaton Bay being ideal for jaunts. Also within comfortable reach of the city is Mljet Island, where a lush national park draws visitors. Just a relatively short boat trip away is the small island of Lopud, belonging to the Elaphiti Islands archipelago and famed for its gorgeous sandy beaches, particularly those around the Bay of Sunj. Although too far for a day trip to be practicable, a weekend break to the city of Split is well worth the effort, since Roman remains in Croatia don't come much more spectacular than its Diocletian's Palace. More information about Dubrovnik Attractions Nearby. 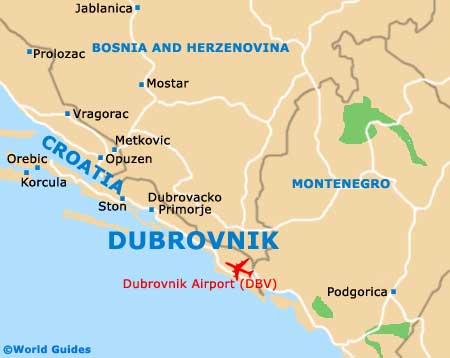