Zagreb is Croatia's capital city, residing in the central / northern region, where it is big on tourism year-round. This is a vibrant place with a medieval old core and lots of Austro-Hungarian architectural delights, as well as a newer, exciting town loaded with hotels and restaurants. There are squares galore to sit at, large parks and pleasant old alleyways to stroll along, as well as a whole bunch of interesting buildings.

The best time to visit for the weather is late spring or early autumn, while in the summer, Jarun Lake draws big crowds, with its boating and waterfront disco. Summer trekking in nearby Samobor is also popular, and the winter sees the opening of the ski season at neighbouring Mount Medvednica.

Zagreb's cafe culture and bar scene is thriving, with the Tkalciceva in the Upper Town being lined with options, and in the Lower Town, it is the atmospheric Bogoviceva area that is the place to hang out, along with the Trg Petra Preradovica plaza and its street entertainers. Zagreb tourist information is available at several local tourism outlets. The principal office is located on the Trg Bana Josipa Jelacica (Ban Jelacic Square), near the equestrian statue.

Much of the sightseeing in Zagreb is based around the Upper Town (Gornji Grad), where attractions are based within the Gradec and Kaptol neighbourhoods, close to Ribnjak Park. The Lower Town (Donji Grad) is situated to the south and alongside the railway station. A self-guided walking tour of the city is highly recommended, with routes leading sightseers past the bustling Dolac Market, the presidential Ban's Palace (Banski Dvori) and the Trg Josipa Jelacica - Lower Town's epic central square, where local trams congregate. It is worth noting that many areas of the Upper Town and Lower Town are completely pedestrianised, meaning that you can walk around freely without cars getting in the way. Families on holiday in Zagreb may like to spend an afternoon at the easterly Maksimir Park and Zoo (Maksimirska), or visiting the Botanical Garden (Botanicki Vrt), which is located on the southerly side of the city, next to the Marulicev Trg. More information about Zagreb Tourist Attractions.

The rich Croatian history of Zagreb is clearly visible in its wealth of old buildings and some of the oldest include the medieval Kamenita Vrata Gate and the 13th-century Medvedgrad Fortress, which resides on the southern aspect of Mount Medvednica and boasts some superb panoramas. More cityscape views can be found at the top of the Lotrscak Tower (Kula Lotrscak), where a midday cannon has been fired for more than 100 years. Zagreb's Cathedral of the Assumption of the Blessed Virgin Mary on the Kaptol Trg is another impressive sight worth capturing on camera, as is the Parliament Building (Croatian Sabor) on the Markov Trg and its neighbour, St. Mark's Church (Crkva Svetog Marka). More information about Zagreb Landmarks and Monuments.

Zagreb is often referred to as the city of museums and tourists will be able to soak up a huge amount of information about the city's past. At the Archaeological Museum (Arheoloski Muzej) are prehistoric artefacts and excavated relics, while the Museum of the City (Muzej Grada Zagreba) is set within a 17th-century convent and features a strong medieval theme. The Croatian Natural History Museum (Hrvatski Prirdoslovni Muzej) is one for children, with its fossils and zoology displays, and the Croatian History Museum (Hrvatski Povijesni Muzej) is the perfect place for history buffs to indulge their interest. If art is more your kind of thing, then you will have to choose between the Museum for Arts and Crafts (Muzej za Umjetnost i Obrt), the Klovicevi Dvori Gallery (Galerija Klovicevi Dvori), the Croatian Museum of Naive Art (Hrvatski Muzej Naivne Umjetnosti) and the Strossmayer Gallery of Old Masters (Strossmayerova Galerija Starih Majstora). More information about Zagreb Museums and Zagreb Art Galleries.

Sandwiched by the Sava River and Mount Medvednica, Zagreb is a capital city well-placed for day trips. Jarun Lake is one of the most obvious excursions that tourists are likely to take, since it is just 15 minutes away, although the Dalmatia Coast may also beckon, being just a few hours away and boasting some popular beaches. Rather closer to home is the medieval town of Samobor and its plentiful Baroque architecture, and the small town of Karlovac, which has grown up around four rivers and features a historic centre designed in the shape of a star with six points. At under an hour's drive from Zagreb, Vrbovec is another characterful old town and is most famous for being the place where Croatian leader Petar Zrinski was born in the early part of the 17th century. It is even possible to reach Ljubljana without too much fuss, with this Slovenian city being under two hours to the west and connected by the lengthy E70 highway, which passes by Novo Mesto along the way. More information about Zagreb Attractions Nearby. 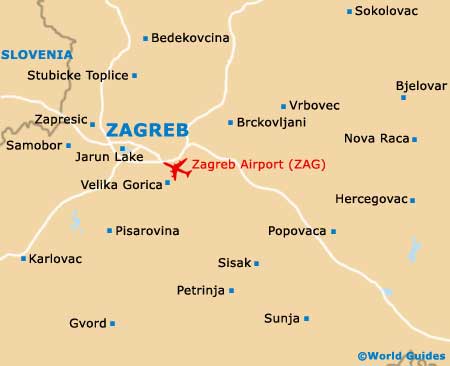