The main tourist attractions within Liege are to be found at their most plentiful within certain areas. These include the Carré, which is the historic centre of Liege and a good place to begin a spot of sightseeing, with a number of old landmarks never far from hand.

Also worth checking out is the Outremeuse district, where the riverside pathways are just one of the many attractions here. Located on the Place du Marché, the Town Hall (Stadhuis) is a much-loved local landmark and its classical architecture dates back to the early part of the 18th century.

Other tourist attractions in Liege include the Palace of the Prince Bishops, the Saint Paul Cathedral and of course the famous Mountain of Bueren (Montagne de Bueren) staircase, where some extraordinary views await at the top, if you are prepared to climb the 373 steps. Without doubt one of the most famous sights and landmarks within the whole of Liege, the Mountain of Bueren features prominently on postcards of the city and has become very much an iconic structure. This extremely impressive and somewhat daunting flight of stairs is rather steep, so be ready for quite a climb. However, the Mountain of Bueren is not to be missed and those who reach the top will find that the climb was well worth the effort, being greeted by glorious vistas across the city, with views of palaces and the citadel slope itself.
Open hours: daily - 24 hours
Admission: free 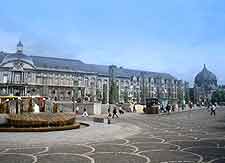 Palace of the Prince Bishops

Address: Place St. Lambert, Liege, Belgium, BE
The Palace of the Prince Bishops is a truly glorious landmark of a building and dates back to the 16th century. Occupying a central location in Liege and presiding over the Place St. Lambert, the palace was actually built on the site where the former St. Lambert Cathedral once stood, prior to the famous French Revolution. Today, the Palace of the Prince Bishops is home to both the law court and also the provincial government. Close by, look out for the archaeological exhibition at the Archeoforum.
Open hours: daily entrance to the courtyard, prior arrangement is necessary to view the actual palace
Admission: free 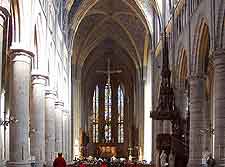 The Saint Paul Cathedral is amongst the main tourist attractions in Liege and is definitely one for the camera. This is actually one of the original group of collegiate churches, of which there were originally seven. Inside you will discover an interesting treasure filled with religious artefacts, and also the tomb of St. Lambert.
Open hours: daily
Admission: charge 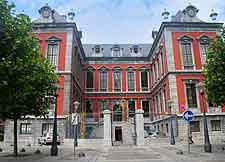 Address: Place du Marché, Liege, Belgium, BE
Whilst the Liege Town Hall is locally known as the Stadhuis, it also goes by the name of 'La Violette', with much of the building only being opened to members of the general public on special occasions. However, the 'room of lost steps' can be explored and is perhaps better known to Belgians as the 'salle des pas perdus'. The Town Hall stands proudly on the Place du Marché and is surrounded by a number of further attractions and architectural gems, including period houses with blue stone facades, and the Perron monument. Symbolizing the freedom of the actual city, Liege's current Perron was built in the late 1690s and is an ornate octagon fountain, with four stone lions, three graces and a large pine cone.
Open hours: daily
Admission: free