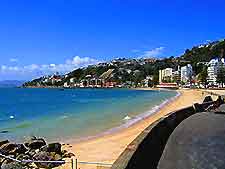 Wellington, on New Zealand's North Island, contains a vast array of beaches, with regular buses linking the city centre with many of the city's most stunning secluded bays and top surfing locations. The neighbouring township of Plimmerton is home to one of the region's most appealing beaches, with this area originally being settled by the Maoris.

Beaches around Wellington are used for a wide range of related activities, such as sunbathing, tramping, scuba diving, snorkelling, swimming and surfing, all of which have become major pastimes here. When swimming, it is always important to only swim between any lifeguard flags present, in case of strong waves and unpredictable rip tides. 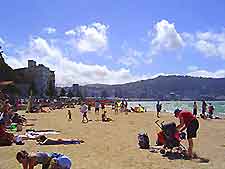 Some of the best beaches around Wellington are located along the Eastbourne coastline, which is full of peaceful stretches, bays and areas of extreme natural beauty. With nearby hills offering spectacular views of the harbour area, the Eastbourne coast contains a wealth of swimming opportunities, golden sand, speciality shops and street cafés.

Swimming is best during high-tide times and countless beaches around Wellington are ideal for swimming, although the sea can be rough at times. This means that it is always sensible to exercise caution. Surfing is also a popular recreational activity and one of the best places for surfing can be found at Houghton Bay. 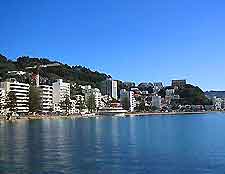 Wellington's magnificent beaches usually feature good amenities, with many vibrant beachside restaurants, cafés and bars nearby, often boasting wonderful views of the coastline. Beaches are also perfect for a range of water sports and beachcombing, with some beautiful pieces of driftwood being washed up most days. Inspectors patrol during the summer months and some volunteer lifeguards may be available at busy times.

The beaches of Wellington, have always been an important magnet for tourists, being used all year round, particularly during the summer months of December, January and February.

Address: Breaker Bay Road, Wellington, North Island, 6003, New Zealand
Breaker Bay can be found a little over 11 km / 7 miles to the south-east and is a reliable spot for both swimming and sunbathing. The clear waters are also ideal for scuba diving, with a wealth of colourful marine life living just under the surface, waiting to be explored. Of note, the Beacon Hill Reserve and Ataturk Park reside on either side of the bay.

Address: Ocean Parade, Wellington, North Island, 6010, New Zealand
Brendan Beach is one of the city's quietest stretches and is situated on the northern outskirts, alongside Pukerua Bay and within easy driving distance. Featuring calm waters suitable for swimming and a clean sandy expanse ideal for sunbathing, this stretch lies next to the Raroa Reserve and also contains some coastal walking trails with superb views.

Address: Eastern Bays Marine Drive, Wellington, North Island, 6008, New Zealand
Days Bay is to be found within the Eastbourne district and is the perfect beach for relaxing, with calm waters highly suitable for swimming. Other attractions include walking trails, picturesque picnic spots, off-shore fishing and cruises. Both the East Harbour Park and Williams Park are nearby.

Address: Evans Bay Parade, Wellington, North Island, 6003, New Zealand
Sited to the east of the city centre, Evans is an attractive bay and is popular with windsurfers from all over the area, with equipment hire nearby. Other attractions include scenic walkways and coastal views.

Address: Evans Bay Parade, Wellington, North Island, 6003, New Zealand
Haitaitai Beach is located on the eastern outskirts, close to Haitaitai Park and the Town Belt, and this is a good destination for swimming, yachting and fishing. Featuring changing areas, secluded spots and wonderful views, the bay also contains a number of walking trails around the bay.

Address: The Esplanade, Wellington, North Island, 6003, New Zealand
Houghton Bay, in southern Wellington, lies alongside the View Road South Headland Reserve and the Buckley Reserve, and attracts surfers from all around this part of New Zealand's North Island. With strong waves providing ideal surfing conditions, the bay is often full of experienced surfers, with their performances regularly attracting spectators. Swimming opportunities are available nearby, together with coastal walks and views.

Address: The Parade, Wellington, North Island, 6002, New Zealand
Island Bay can be found in southern Wellington, being roughly a 15-minute drive away and surrounded by interesting small bays, just waiting to be explored. With clear, calm waters, attractions include swimming, scuba diving, snorkelling and also sailing.

Address: Moana Road, Plimmerton, North Island, 6006, New Zealand
Karehana Bay is sited on the northern outskirts of Wellington, where it comes with stunning views of Porirua Harbour, Mana Island and the stretching coastline. Highlights include calm, warm waters perfect for swimming, coastal walking trails, interesting rock pools and plenty of sunshine. Places of interest here include the Plimmerton Boating Club and the Karehana Recreational Reserve, as well as the beachfront along adjacent Hongoeka Bay.

Address: Lyall Parade, Lyall Bay, Wellington, North Island, 6003, New Zealand
Based some 15 minutes to the south and alongside the airport, Lyall Bay is the perfect beach for body boarding, since it regularly features strong waves and rip tides. Home to pale sand, attracting sunbathers from all over, areas of the bay are also often suitable for swimming.

Address: Makara Road, Wellington, North Island, 6005, New Zealand
Residing on the westerly outskirts, Makara Beach is a charming location with much to offer sunseekers. There are long walking trails with views of the stretching coastline, rock pools, sheltered areas, a nearby café and plenty of scenic places where you can enjoy a picnic. 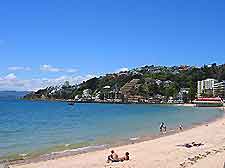 Address: Oriental Parade, Wellington, North Island, 6001, New Zealand
Oriental Bay features one of the city's most popular beaches, being just a matter of minutes away from the city centre. Home to excellent facilities, this secluded coastal area is suitable for sunbathing, swimming and sailing. Visitors often go for a walk along the main promenade, stopping off at the cafés and speciality shops nearby. Attractions in this area include the Waitangi Park, the Royal Port Nicholson Yacht Club, the Freyberg Pool and Fitness Centre, and the popular Fisherman's Table Restaurant.

Address: Steyne Avenue, Plimmerton, North Island, 6006, New Zealand
Located on the northern outskirts of Wellington and within the neighbouring township of Plimmerton, this beach is a little more than 26 km / 16 miles away and features spectacular areas of golden sand, perfect for peaceful sunbathing. The water here is generally quite calm and suitable for swimming, while the nearby Porirua Harbour is full of impressive-looking boats and yachts. If you have time, you can enjoy a lengthy stroll along Sunset Parade, admiring the many beachfront houses lining this road.

Address: The Esplanade, Wellington, North Island, 6002, New Zealand
Lying directly to the south of Wellington, Princess Bay features a glorious stretch of fine sand and calm water suitable for sunbathing, snorkelling and swimming, with nearby changing facilities. This is a very natural beach, with lots of rocky outcrops and plenty to explore.

Address: Eastern Bays Marine Drive, Lower Hutt, North Island, 6008, New Zealand
Sunshine Bay can be found in nearby Lower Hutt, within the neighbourhood of Eastbourne. This sunny spot is suitable for a range of beach activities, such as sunbathing, swimming, snorkelling and cruises around the bay. Other attractions include nearby scrubland and a wildlife reserve, rich in native flora and fauna.

Address: Moa Point Road, Wellington, North Island, 6003, New Zealand
Tarakena Bay is best known for its distant views of New Zealand's South Island and its proximity to the Wellington International Airport. The bay lies on the south-eastern side of the city and is a popular spot for walking and relaxing, away from busy city life. Those with a car will find that by following the Moa Point Road, you will soon reach the Wahine Memorial Park and then Ataturk Park.

Address: Titahi Bay, Porirua, North Island, 6006, New Zealand
Titahi Bay is a spectacular bay within easy reach of the city centre, being located some 25 minutes to the north and alongside the Whitireia Park Reserve. Highlights include many local attractions, nearby speciality stores and gift shops, safe swimming areas, offshore fishing and scuba diving.

Address: Marine Parade, Wellington, North Island, 6003, New Zealand
Located within the suburb of Seatoun and some 9 km / 6 miles to the south-east, Worser Bay is home to a number of seaside attractions. These include sandy areas, calm water suitable for swimming and snorkelling, a playground for children and nearby refreshment kiosks, as well as Seatoun Wharf and the Marine Promenade, which leads to Churchill Park. 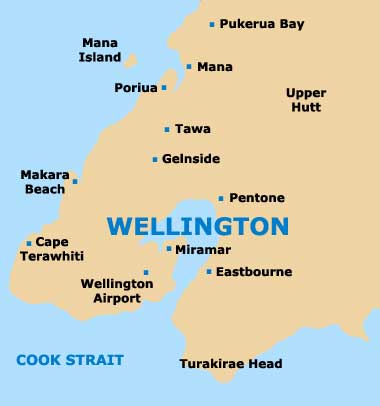